Opening the curtains of our friend’s beautiful little home in the Fjords on the morning of our ninth day in Norway we were super excited to find some blue skies and a beaming sun greeting us. Gone were the rain clouds for now; hurray! But not all was glee. We sadly had to say goodbye to our friend, Mona, that morning as we were continuing our journey up north.

Today we would be heading towards Geiranger, but before we would arrive in that little town, there was still plenty to see along the way. And with the weather being on our side this time, we were sure going to take advantage of it.

Our first stop that morning was the Loen Skylift. This cable car to Mount Hoven was opened only in May 2017, so not a lot of history there. It does take you up to the top of the mountain at 1011m in only five minutes, making it one of the steepest cable cars in the world. From the top you are blessed with a 210° view of the area. But we didn’t just go up to take a look at the view. We were ready to get the blood flowing in our legs again and tackle one of the hikes up there.

We didn’t have anything planned beforeand but there is a hiking map available at the top station. We decided to start the “Hoven – Skredfjellet – Hoven” hike. This trail was 7,9 kilometres long and had a 523-metre climb in total. That looked like something we could do. Most of the height metres were already at the start of the hike as it started off pretty steep up to Skredfjellet. The view up there was pretty magnificent though. So even if you don’t have a lot of time, it’s still worth it to just hike to that point.

We kept a steady pace throughout our entire hike, and only stopped briefly for some lunch, but nonetheless we ended up taking a lot longer than expected to complete this hike. We had arrived by the skylift at the top station of Mount Hoven around 10am and it wasn’t until around 2pm that we had completed our loop. The last part of the hike, back to the skylift station, was very steep and a bit dull as it was just a gravel path that was also being used by trucks. But fortunately the sights around us remained breathtakingly beautiful. It makes the suffering worthwhile.

If you’re going up to Mount Hoven in the summer, take into account that it can be a lot colder up top than it is below on ground level. I wasn’t just wearing my jacket and bonnet as a fashion statement in the picture on top. I actually could use those.

Once we were back down with the lift, it was time to hit the road again and continue deeper into the Fjords. If you take the fastest and shortest road to Geiranger, it’s another 85 kilometers and about two hours before you reach your destination. But we were going to add a bit more to that.

When you’re driving along route 15, it’s definitely worth it to make the detour along the Gamle Strynefjellsvegen, also known as Fylkesvei 258. This road was constructed between 1881 and 1894 and at the time it was the only road connecting Western and Southern Norway. Even now most of the original road remains untouched. When driving along the strynefjellsvegen,, you’re rewarded with views of old stone masonry and long rows of guard stones. You often feel like you’re in a whole other time. It’s magnificent! 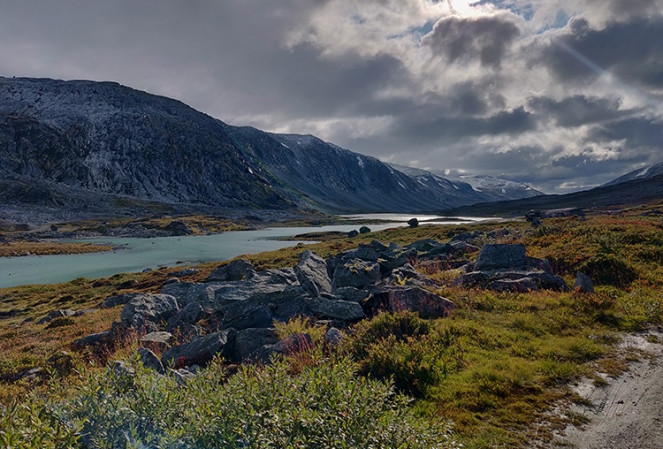 After 27 kilometres of beautiful landscapes, we were back on the route 15. Now we set course for Geiranger and the Geiranger Fjord. One of the most famous destinations in the Norwegian Fjords. The excitement was definitely palpable in the car. Especially with the sun shining down on us.