When you’re traveling to Norway, you have to know that there is a very big possibility that you’ll have quite a bit of rain during your holiday. A two-week trip up north without an overcast sky and a single drop of water would probably be half a miracle.

The first days of our trip had already been a bit overcast, but then once we were past Bergen, the rain started to come down in buckets. We were looking forward to three very, very wet days, and that right as we were arriving in the beautiful Fjords. I’d be lying if I said that this didn’t affect our moods and made us a bit gloomy. But we tried to make the best of those days anyway. 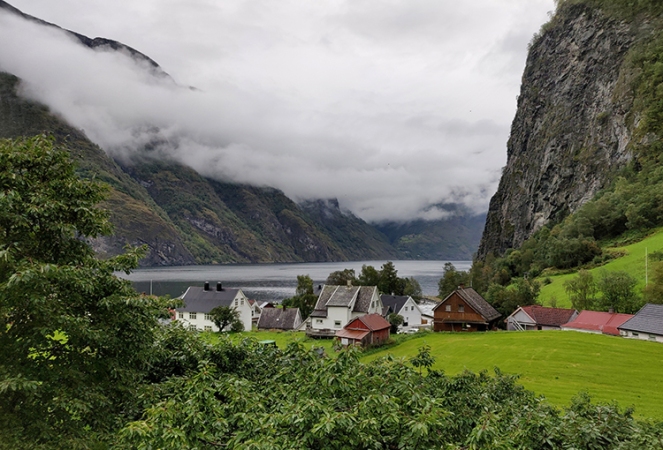 The first of those days the rain pounded down on us like never before. As we were driving away from Bergen and into the Fjords we almost couldn’t see the road in front of us. It was actually pretty scary. So the scenic route wasn’t very scenic at that time. We continued driving, just because that seemed like the only thing we could do. But when we arrived in Voss around noon, we had just about had it with all that driving and not seeing anything. We wanted to stretch our legs and near Voss you can find the Bordalsgjelet, a small gorge with a waterfall.

It was a small hike to get to the gorge itself but upon arrival we noticed that there was a small parking lot right next to it. Fortunately the rain had turned into only a slight drizzle, so we weren’t all that bothered. After all we were looking to stretching our legs. The gorge itself was beautiful, but nothing very special and it was quite small as well. It takes only about five minutes to walk to the end and then another five to get back. But it was a nice place to stop that was also beautiful with an overcast and rainy sky. 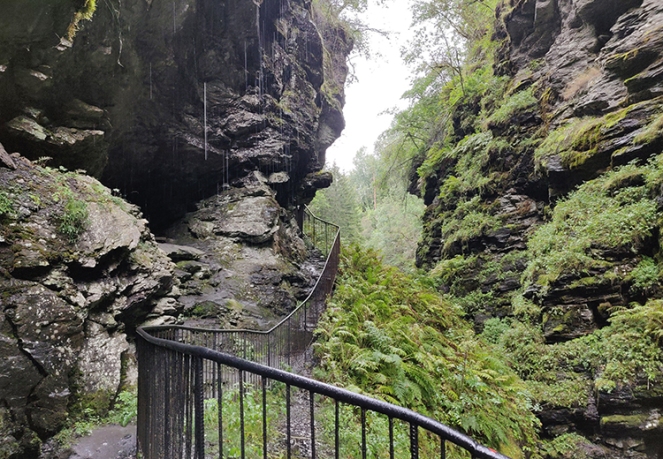 Because of the rain, our end destination of the day, Undredal, closed in on us a lot sooner than planned. Considering Undredal is a really small town, we decided to continue driving a while longer to one of the most famous tourist hotspots in the area: Flam.

To reach Flam from Undredal, you have to drive through the longest road tunnel in the world: The Laerdal Tunnel. 24,5 kilometers of concrete surrounding you. In three places in the tunnel they’ve added some blue lightning to keep the drivers focused. While it is cool to say we’ve driven through the longest road tunnel, it’s just a really long time of driving with nothing to see.

But we made it to Flam. And that was the biggest let down ever. Flam is the place where most of the gigantic cruise ships dock and many of the tourist just get out to take the Flam Railway. That railway is supposedly very beautiful but we had decided against doing that since we had a lot of beautiful roads ahead of us to drive by car and the weather was just awful so we didn’t see the point. So that only left us with some very touristic souvenir shops and the sight of a cruise ship. Not much to write home about. So after a coffee and some pie, we turned around again – back through the tunnel – and drove to Undredal.

The little town of Undredal didn’t have much to offer either when it comes to activities, but at least it had a whole lot more charm. The view on the Fjord was just amazing and I can only imagine it to be breathtaking if the weather is better.

The next day, more rain and grey skies were in the forecast. So we were looking forward to another day in the car. Fortunately we were on route to visit my friend’s friend who lives in a small place in the Fjords. So this time it wouldn’t really matter if we arrived early at our end destination. We did make some stops along the way, such as the Kaupanger Stave Church, just to stretch the legs whenever the rain wasn’t that bad.  We arrived in Nordfjordeid, the city closest to where that friend lives, around 3pm so right in time for more coffee and pie. And then the rest of the afternoon was spent socializing. So then the rain didn’t really bother us that much.

After the coziest evening and a good night’s rest, we were ready to explore more of the Fjords. It seemed like the rain wouldn’t be that heavy anymore – thank god! -, so we were eager to discover some sights the area. We first headed to one of the narrowest valleys in Norway; Norangsdalen. The rain may have lessened a bit, but the grey overcast skies were still very much present. But this time it didn’t really bother me. In fact it gave the valley a very eerie and special look.

Next up was a little hike, to get the blood flowing again. We drove back in the direction of Nordfjordeid and stopped in a little place called Randabygda. There you’ll find the start of the trail that goes to the Tvinnefossen. Because yes, one can never see enough waterfalls. The hike wasn’t all that special, but the fall itself was pretty cool as you could walk pretty closely behind it. After all the rain the last couple of days, we weren’t even bothered anymore about getting wet.

Early afternoon we then returned to Nordfjordeid to meet up with the friend we were staying with. She works at the Norwegian Fjord Horse Center, Norway’s national resource center on this amazing Norwegian horse breed. We got an exclusive look behind the scenes at the place which was the coolest thing ever. Those Fjord horses are just so majestic.

And having a local to guide us around, it was time for another small hike in the area. There are quite a few mountain peaks in Nordfjordeid and many of those have trails all the way to the top. Mona took us up Skarhaugsnakken, which was a pretty intense hike up through the woods and the meadows. But the view over the city was all worth it.

Tired but fulfilled with how the day went, we headed to Aske Gatemat & Byggeri for some well-deserved dinner. The rest of the day we spent relaxing and just enjoying the cosy atmosphere of our friend’s home. The next day we would be leaving her again and continuing our road towards Geiranger. And the weather forecast was a lot more positive as well, so bye bye rainy Fjords and hello sunny Fjords!

At this point I'd give my left arm just to be able to be back in this vibrant city. I can't believe it's been six years already! It was my first trip oversees, so so very dear to me. It was also my first time travelling together with my father, which only led to more travels together. I'm almost getting teary eyed looking back on it. So yeah, the next couple of days my socials will be filled with throwbacks of #NewYork and I'll just have to hang in there at work... The struggles of a part-time traveller...
Wishing I was back in this beautiful country so so badly. That experience there is so dear to me and I hate how every day a bit more details are slipping from my memory! 😔 It's also the first day of February today and for the first time in seven years I won't be travelling this month. 😱 It feels odd to not have any major travel plans this month as I've grown so used to it. But that doesn't mean that I don't have exciting things ahead of me. First of all there is the Olympic Triatlon coming up in May in Lisbon and then hopefully I'll be able to go to Australia October - November this year! But still, it's weird that February will be a work month this year. So much for a tradition 😂
I can't believe it's already four years ago that I arrived in #Havana, ready to embark on a ten day trip through the beautiful country of #Cuba. It was my first trip to another culture, so it has a very special place in my heart. I'm sad we didn't get to stay longer as the Cuban people were so warm and sweet. I really hope to go back one day and find that nothing much has changed on that part.
The #UpperBelvedere in #Vienna is not only worth a visit for the famous paintings, such as "The Kiss" by Klimt, but also for its gorgeous #architecture. Even after tree days, it's still impossible to just walk passed rooms like these. Our time in Vienna is now over, but I've fallen in love with all the pomp and circumstance of this city. It certainly was according to my expectations. I'm sad to go back home but I'm so pleased with what I've seen and experienced the past couple of days. Even though it was awfully cold at times, I warmly recommend this city as a #citytrip destination.
These gorgeously decorated halls are still blowing my mind even after two days full of splendour. I think #Vienna is the most decorated city I've visited so far and my love for this type of #architecture is growing with each building we visit. This hall may be a copy of the one we visited in the Kunsthistorische Museum the other day, but it still left me breathless.
That is one gorgeous #library, damnit! I could keep staring at this room forever. All of #Vienna is just filled with gems of stunning #architecture like this. I'm in awe.
%d bloggers like this:
%d bloggers like this: