For me this trip was my very first time traveling to Norway, so I was really excited to discover its capital as I had already fallen in love with the other Scandinavian capitals Stockholm and Copenhagen.

But one of my friends who was traveling with me had already been to Norway a couple of years ago and he wasn’t all that impressed with Olso. So we decided to limit our time in the city. We would be exploring Olso on the day of our arrival by ferry and a bit the morning after and then enjoy another evening in the city on the last full day of our trip. 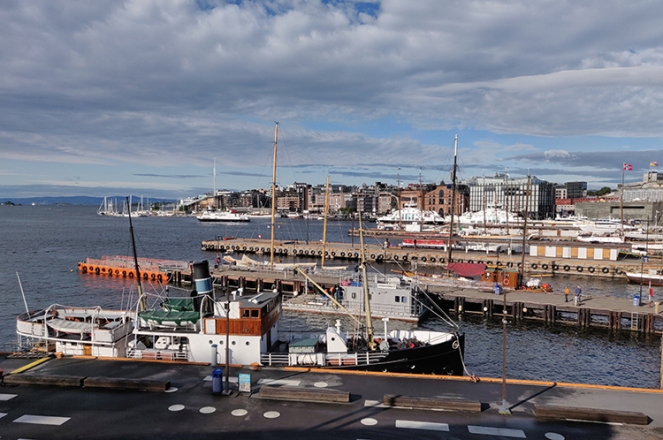 When our ferry docked in Oslo at precisely 10am, we had expected to spend quite a bit of time queuing to get off the boat as we all had to pass customs. But surprisingly only half an hour later, we were already driving through the streets of Oslo city. Hallellujah!

To save ourselves the trouble of having to return to the hotel in the middle of the afternoon to check-in, we already went to drop off our luggage at the lobby so we only had to take it up to our room in the evening. We stayed at the Thon Hotel Slotsparken which was an ab-so-lute delight. We got a pretty amazing deal there as it’s usually a more expensive hotel. We definitely ended up spoiling ourselves already on the first night. Worth it though!

Considering our hotel was next to the Slotsparken, we first went to catch a glimpse of the Royal Palace. It’s nothing too special or extravagant, but the park surrounding it is really nice to stroll through. From there we walked to another famous park in the city: Frogner Park. This place is mostly visited for the Vigeland Sculpture Park, an area with over 200 bronze, granite and cast iron sculptures made by Gustav Vigeland.  Expect to see a lot of nudity and weird compositions. Great fun!

Then it was time to head to another one of Olso’s highlights: Aker Brygge. I was mostly interested in the architecture of this inner harbor area, but this place can easily peak everyone’s interest with the many restaurants, shops and exhibitions.  It’s especially nice to walk along the waterfront and just breathe in the atmosphere. 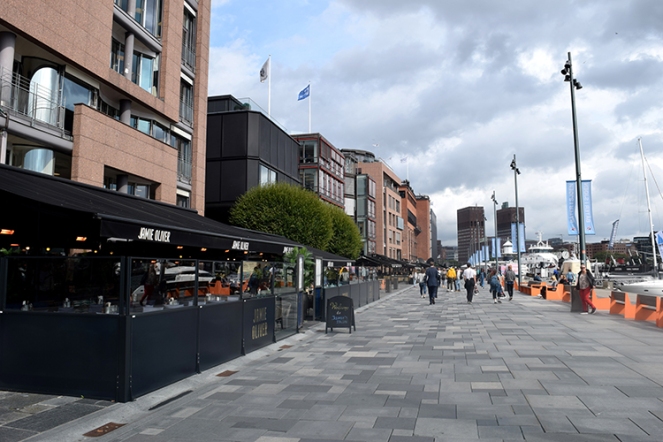 If you follow the waterline, you effortlessly end up at the City Hall and from there you can continue to the Akershus Festung. This fortress dates back to the 13th century and today stills contains banquet halls, the Royal Mausoleum and the government’s reception rooms. Many events are also held on the site. It’s free to visit, open year-round and from the inner harbor side you get a nice view on Aker Brygge and the City Hall.

We continued our stroll along the water and so ended up at another one of Oslo’s main views: the Opera House. This modern building would be worth a visit for the architecture outside alone, but it’s even more exciting considering you’re allowed to walk on the roof. It’s quite a steep climb and I can only imagine that it can get quite slippery when it’s wet, but it’s just such a cool thing to do. The view you get from up there, is a nice added bonus. 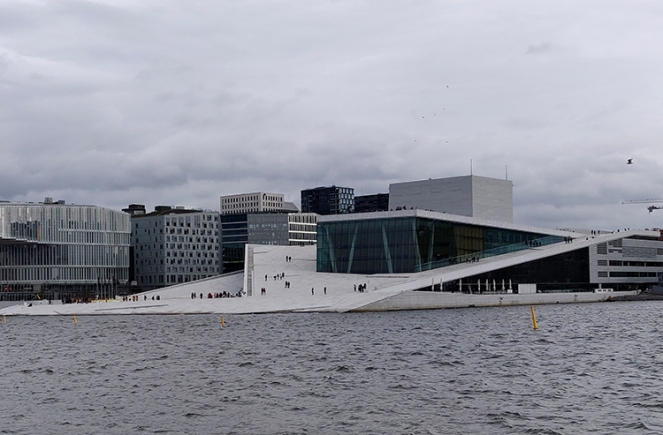 And then we returned along the Karl Johans Gate to the Slotsparken. This is Olso’s main street and mostly pedestrian area only. Along the way you find many shops, restaurants, cafés and bars so you can easily spend a while on this street alone. When we were visiting end of August there was a climate strike going on along that street and in the park so there was a lot of ambiance.

For dinner that evening we were conclusive that we wanted Mexican. When we heard about the Mexican Night at Matthalen – the indoor food market of Oslo – we of course went to check that out. It sounded almost too good to be true. Sadly this was a bit of a disappointment food-wise but the Friday evening ambiance was pretty cool and we got to see the Akerselva, the river flowing through the city, so it was still worth the detour. We ended up back in the city center, at Los Tacos. There we got ourselves a big ass burrito for a very reasonable price, at least for Norway. And it was just so good as well!

The next morning – after an absolutely delicious breakfast at Thon Hotel – we took our car and headed to our last stop in Oslo; the Viking Ship Museum. This museum is located on the Bygdoy peninsula and houses three Viking era burial ships. It’s pretty impressive to see those ships and especially the distances they covered with what little facilities they had. Apart from the ships, there are also a few other objects on display, but mostly it’s the ships that draw your attention. Definitely worth the 100NOK entrance price. 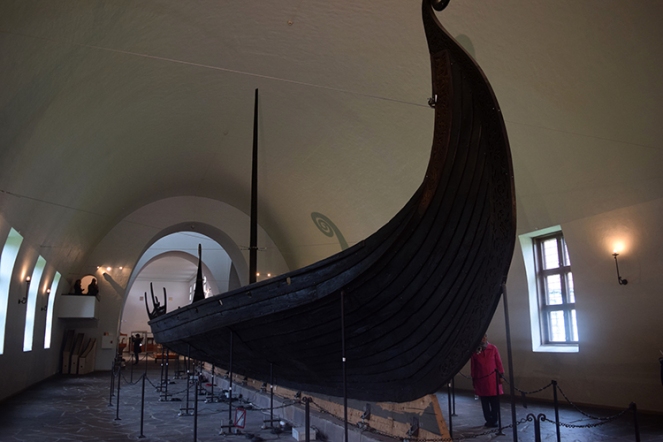 After the museum, we hit the road and started our tour of Norway, only to come back little less than two weeks later to end our trip. We arrived back in Oslo late afternoon and weren’t feeling like much as it was also raining quite a lot. We did go out for dinner to a small Italian place, Rust, close to our hotel. I had a very delicious pasta and my friend’s food looked to die for as well. That bit of heaven gave me energy again and since it had stopped raining, we decided to explore a bit of Olso during nighttime as well. We walked back to Akers Brygge, the Akershus Festung and the Opera House for some evening views. I just love cities by night. 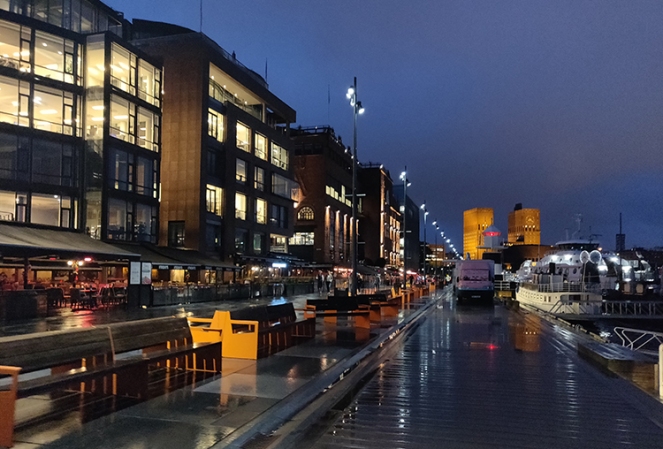 When the next morning the sun was present, I couldn’t help myself. We only had to be back at the ferry terminal a bit before noon, so we still had a bit of time to enjoy the nice weather in the city. Once more we walked to the Opera House and Akers Brygge but at that point I would have walked anywhere just to be able to soak up that sun. It was bliss. But then it sadly was time to head back to our hotel to check-out and then head back to the ferry terminal to board our vessel back to Kiel.

For me, time we had to explore Oslo was more than enough to see what I wanted to see. Of course there are many other museums with lots of information and interesting sights, but considering I’m not much of a museum person, I didn’t want to spend my time visiting those. Oslo definitely isn’t my favourite city and I don’t think I’ll go back unless it is to start another roadtrip through Norway, but I’m still glad I got to see the most important highlights in the city.

2 thoughts on “The highlights of Norway’s Capital: Oslo”