After a spectacular evening on the ocean watching the humpback whales, our next day on Vancouver Island was all about discovering what Victoria itself and its vicinity had to offer.

The few glimpses we had had the day before were certainly promising! 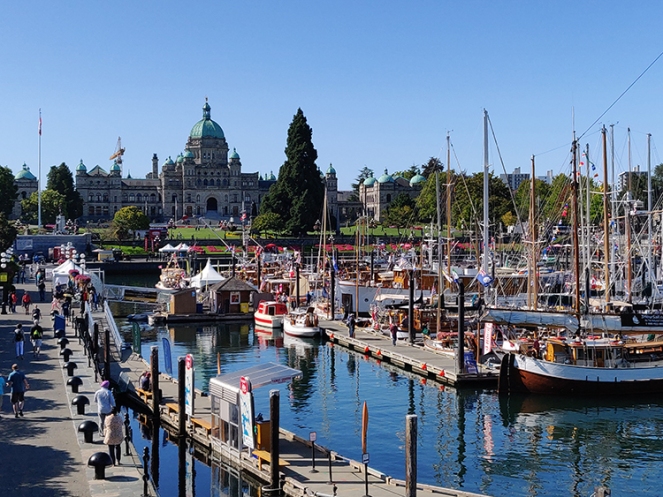 We started our day with a long time queuing for breakfast in front of ‘Jam café’. However once our food was put in front of us, we immediately knew it had been worth it. It was de-li-cious! We ate until we literally couldn’t put another bite in our mouths. No lunch for this bunch!

Belly (too) full we started our self-made walking tour through the city. Past Bastion Square we once more went to the inner harbor. I think it’s impossible to get tired of that view. Around the harbor itself there are many small stalls that sell all things from art pieces to souvenirs to food. You can also find a few musicians doing their thing – one better than the other-  and creating a lovely, relaxed atmosphere.

Past the Parliament Building we went to Thunderbird Park where you can find Helmcken House, one of the oldest houses in British Columbia, and another bunch of totem poles. It’s more a patch of grass than an actual park though.

For a real park, one has to go to Beacon Hill Park. So with the sun shining down on us, that’s where we went. We wandered – read: got lost a few times- through the park, past the cute little ponds and their ducks until we reached the Mile Zero Monument in the south-west of the park. This is the start of the Trans-Canada Highway that goes all the way from the Pacific Ocean on the West to the Atlantic Ocean in East-Canada. A perfect photo opportunity knowing that we would be driving quite a few miles on that highway later on our trip.

Back through the park and along the harbor, we continued our walking tour to Fisherman’s Wharf Park, a floating pier with shops, food stalls and quaint, little houses. This was one of my favorite places in Victoria, but it’s also one of the busiest as many tourists seem to like it there.

Thanks to the musician with his guitar strumming ‘Country Roads’, there was a great ambiance going on. Full on holiday feeling! And even though we were still way too full from breakfast, the food stalls looked amazing. Oh how I would have loved to try the fish and chips there. But to avoid being sick from eating too much, we reluctantly ignored those stalls and instead focused on the souvenir shops and the fishermen’s houses.

By the time we were back at the inner harbor, it was early afternoon and we already had a little extra room in our stomachs for some ice cream. One kinda expensive but very yummy ice cream later, we were on our way back to the hotel. Time to pick up our Chevy and drive around for a bit. Destination; the X-Mansion! Or officially known as Hatley Castle.

This Edwardian style estate, dating back to 1908, can be found about 10 kilometers outside of Victoria. At the time of construction it was the largest private residence on the West coast. You can only visit Hatley Castle by going on a guided tour, but the outside of the castle itself is already more than worth the stop. Amazing architecture and the vibe is just awesome. Sadly no Ryan Reynolds in Deadpool costume present. Bummer.

Close to Hatley Castle you can also find the Fisgard Lighthouse. This is the oldest lighthouse on the west coast of Canada. Sadly the site on which you can find the lighthouse is only open until 5pm and we only arrived a couple minutes before 5pm. Too little time. The cashier pointed us towards a place where you can still see the lighthouse from afar. But it was so far away it was hardly worth the detour. That was quite the anticlimax.

So back to Victoria city center it was. We visited a few more souvenirs shops before we enjoyed an amazing dinner – fish and chips at last! – at the Irish Times Pub. And then it was time to retire to our hotel room. We had an early wake-up call the next day for our trip to Ucluelet and the Pacific Rim National Park. Ready for some Canadian nature!