After the Dades Valley and the Roses Valley, the next stop of our Moroccan adventure was the Todgha Gorge. This series of canyons is a bit more touristy and better known than the previous places and we did notice that on certain occasions. Luckily it’s not yet swarming with tourists so it doesn’t take anything away from the beauty of this canyon.

One of my favorite memories in the Todga Gorge was our evening hike through the palm tree oasis behind our hotel. It was so unexpected and ended up being a perfect evening activity.

After a 75 km drive, we arrived in the Todgha Valley. It was already around 5pm so our hotel -Auberge Camping Atlas- was the first destination we headed for. We were warmly greeted by the owner, who didn’t shy away from a few jokes. Funny guy, that one!

We were planning on just relaxing a bit on the lovely patio of the hotel when the owner informed us of the palm tree oasis behind their property that we could access through a little door on the side. He didn’t need to tell us twice. We put on our hiking shoes, crossed the small river and into the oasis we went.

There were no real hikes indicated, but there were a few paths visible. These paths are also used by the people working on the fields in the oasis. We could see many of them still farming their lands. We wandered through the beautiful oasis for little under two hours, just going where our feet would take us. It was absolutely amazing. 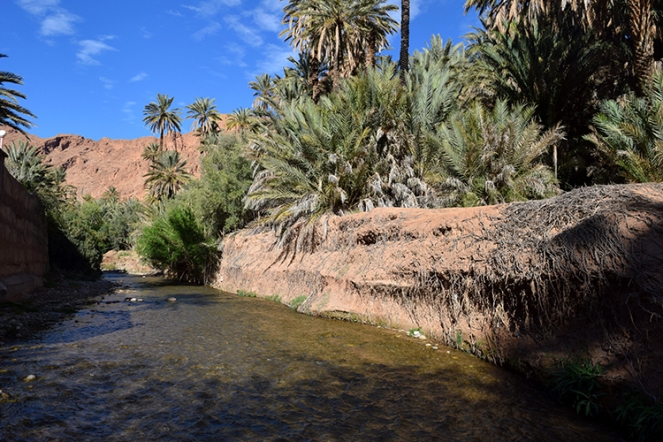 I’m sure the other hotels close to ours also have one of those backdoors into the oasis, but that alone made our hotel one of my favorites of our journey. After checking into our hotel, it was too late for us to still take the car into the canyon, and this way we had an amazing and close evening activity. I can only recommend it! Dinner and breakfast at Auberge Camping Atlas were also really amazing, so another reason to stay there.

The next day we took our car into the gorge. There is a scenic route of about forthy kilometers through it. We left early in the morning and had the place mostly to ourselves. Bliss! 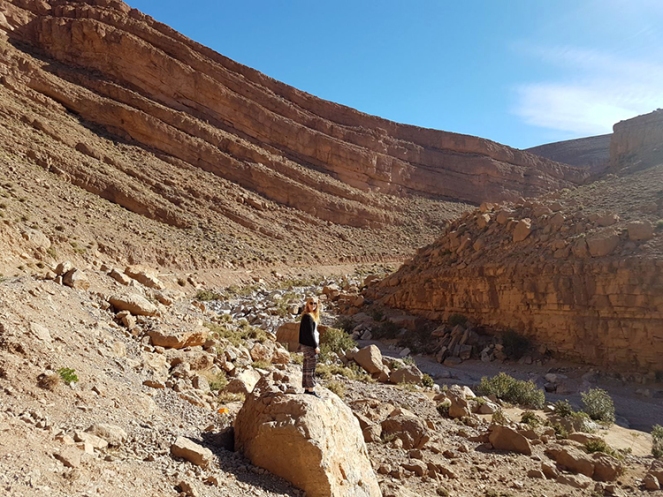 The main “attraction” in this canyon is the 600 meter where the canyon walls are only ten meters apart and a whopping 160 meters high up. You can drive through it, but only by actually walking through it, you can really get the height of those walls. So that’s exactly what we planned on doing.

We parked our car close to that narrowest part, but first took a little hiking trail in the other direction as it just happened to be there and we were curious about those views. It led quite far and was probably a full hiking trail that went on for several kilometers. We only hiked part of it as we didn’t have all that much time. But it was another great surprise to have found that. And once again, not another person in sight.

By the time we returned, the buses and other tourists seemed to have arrived and it was a lot busier. The path through the narrow part was full of people and street vendors. It was such a big contrast with an hour earlier. But since you’re mostly looking up towards the walls, it wasn’t all that bothersome. You only had to make sure you didn’t bump into other tourists, that’s all. 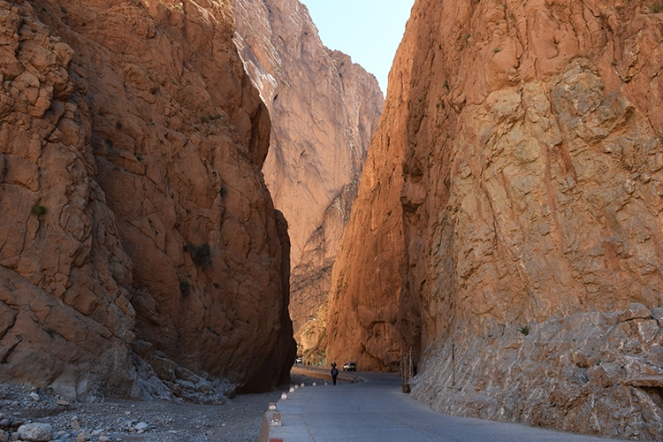 And then it was -finally- time to head to the Sahara Desert. The part of our roadtrip I was looking forward to the most. To say I was excited would have been an understatement!

At this point I'd give my left arm just to be able to be back in this vibrant city. I can't believe it's been six years already! It was my first trip oversees, so so very dear to me. It was also my first time travelling together with my father, which only led to more travels together. I'm almost getting teary eyed looking back on it. So yeah, the next couple of days my socials will be filled with throwbacks of #NewYork and I'll just have to hang in there at work... The struggles of a part-time traveller...
Wishing I was back in this beautiful country so so badly. That experience there is so dear to me and I hate how every day a bit more details are slipping from my memory! 😔 It's also the first day of February today and for the first time in seven years I won't be travelling this month. 😱 It feels odd to not have any major travel plans this month as I've grown so used to it. But that doesn't mean that I don't have exciting things ahead of me. First of all there is the Olympic Triatlon coming up in May in Lisbon and then hopefully I'll be able to go to Australia October - November this year! But still, it's weird that February will be a work month this year. So much for a tradition 😂
I can't believe it's already four years ago that I arrived in #Havana, ready to embark on a ten day trip through the beautiful country of #Cuba. It was my first trip to another culture, so it has a very special place in my heart. I'm sad we didn't get to stay longer as the Cuban people were so warm and sweet. I really hope to go back one day and find that nothing much has changed on that part.
The #UpperBelvedere in #Vienna is not only worth a visit for the famous paintings, such as "The Kiss" by Klimt, but also for its gorgeous #architecture. Even after tree days, it's still impossible to just walk passed rooms like these. Our time in Vienna is now over, but I've fallen in love with all the pomp and circumstance of this city. It certainly was according to my expectations. I'm sad to go back home but I'm so pleased with what I've seen and experienced the past couple of days. Even though it was awfully cold at times, I warmly recommend this city as a #citytrip destination.
These gorgeously decorated halls are still blowing my mind even after two days full of splendour. I think #Vienna is the most decorated city I've visited so far and my love for this type of #architecture is growing with each building we visit. This hall may be a copy of the one we visited in the Kunsthistorische Museum the other day, but it still left me breathless.
That is one gorgeous #library, damnit! I could keep staring at this room forever. All of #Vienna is just filled with gems of stunning #architecture like this. I'm in awe.
%d bloggers like this:
%d bloggers like this: