Even before we left for Morocco, we were very much aware that one afternoon and one morning in Fes would be a tight squeeze to see the sights. But since a full day extra would be too much and we didn’t have another half day to spare, we just had to make it work.

We managed to see most of the sights but would have been able to see more if we had had a few tips beforehand and if my father hadn’t gotten sick upon arrival. Yup, that was just great.

Anyway, here’s an overview of what we did see in Fes and some recommendations for you in case you ever head that way and only have a day as well. (summary below)

First of all; don’t even bother trying to find your riad on your own if it’s in the medina of Fes. It’s simply impossible. Definitely in case of ours; Riad Skilffo. It was in a tiny road and didn’t have any direction signs to it (some others did) or even a sign next to the door. Impossible. Just call the owner to come and get you and you’ll save a lot of your precious time.

So that were our first impressions of Morocco. Slightly anxious for what the next twelve days were going to bring, we finally started our exploration of the medina of Fes, Fes el Bali, a little after 2pm that day. The medina – which means ‘walled city’ – was founded in the 9th century and is the largest in the world. Not getting lost in there is nearly impossible so we decided to embrace it and just went where our feet took us. This way we ended up in places where we often felt like time had stood still. Crazy!

But Fes el Bali offers more than just the many many shops in the maze of streets. The main sights that we wanted to tick off our list that afternoon/ evening were the University and Mosque of Al Quaraouiyine, the Zaouia of Moulay Idriss II, the Al Attarine Madrasa, the Bou Inania Madrasa and the Bab Bou Jeloud.

Those last two were easy enough to find. To help the tourists a bit, there are a few colored walking routes through the medina and the Bab Bou Jeloud – an entrance gate to the medina – is the starting/ end point of many of those. So just look for one of the colored signs (usually up pretty high) that says ‘Bab Bou Jeloud’ and you’ll find it easily enough. Following one or more of those colored routes is a pretty good course of action, but it’s very easy to miss a sign as you’re so easily distracted by all that’s around you.

The second sight, the Bou Inania Madrasa, was really close to our riad, so we stumbled upon that almost right after checking in. The entrance price is only 20 dirhams (= little less than 2 euros) so it’s definitely worth checking out. I especially loved the pretty mosaics on the walls.

For the other sights, we had a bit more difficulty. We hadn’t really figured out the walking route system by then and after two hours of wandering through the many, many streets my dad’s headache became nearly unbearable. So back to the riad it was. Afraid to get lost on my own in that maze, I only wandered a bit more in the main street closest to our riad, but there isn’t much fun about it when worrying about your travel companion’s health. So most of the evening was spent indoors. Quite a bummer when you’re already short on time.

Luckily some rest had done wonders and dad felt a lot better the next morning. Since we had had an early night the evening before, we were up quite early so before breakfast we decided to try and check out a few more sights. Unfortunately the weather wasn’t agreeing and the rain was coming down in buckets. So not only were we already getting lost again, we were also soaking wet. But that’s when we stumbled upon Abdullah – “I’m not a guide, I’m a student” – who was wandering the streets as well. Since we were short on time, we decided to just roll with it and asked him for directions to one of the sights we were trying to find; the Nejjarine Fountain. Knowing that he’d already expect some payment for this – yes that’s how it works-, we decided to just make use of him for the rest of the morning.

And that was the best decision we could have made. In little over an hour, we were quickly guided through the maze of the medina and towards all the remaining sights, most importantly the University and Mosque of Al Quaraouiyine. This university is the oldest one in the world that’s still in operation. As a non-muslim you can’t visit it, but you can peek in through the many doors and get a glance. It’s pretty damn impressive! 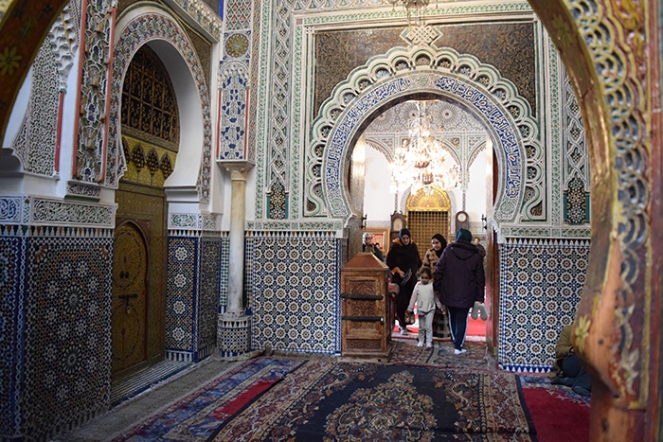 Abdullah also told us a lot of history and other information about what we were seeing which was a really great extra. We ended up paying him 50 dirhams, which of course in his eyes wasn’t enough even though nothing was agreed before and we could have just walked away without giving anything (Not that we even considered that!). They’ll always ask for more, so either make sure you start a little lower or be firm about your first offer and briskly walk away.

After breakfast, we then hit the road only to come back to Fes 10 days later. It was already 6pm by the time we were parked and checked in again at the same riad (no problems this time as we knew where to go!). It was an odd feeling to come back; sort of like coming home a little. That evening we just went to get dinner and then wandered the medina a bit more for the evening ambiance.

The next morning we were once again up bright and early and headed to another part of the city; Fes el Jdid. This part of Fes was founded in the 13th century as an extention to Fes el Bali. It’s pretty similar to the oldest part but it doesn’t feel quite as authentic. We walked through it early in the morning before most of the shops were open, so that might be a reason why it felt that way to us. Through Fes el Jdid and the Mellah (Jewish Quarter) we made our way to the Royal Palace Dar el Makhzen. This palace can’t be visited but the beautiful golden gate is worth it to walk all the way over there. 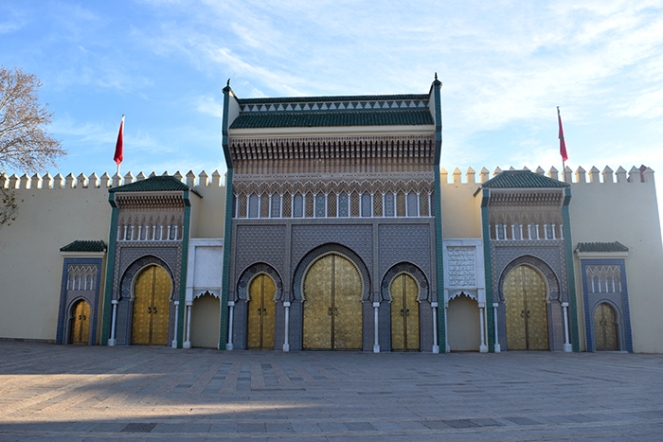 We then returned to our riad for another amazing breakfast before hitting the streets of Fes el Bali again. Since the week before we had just walked past the Al Attarine Madrasa thinking it was closed, we now headed back for a second chance. Apparently they often just close the door but when you approach, the man sitting in front of it will open it. The Madrasa is quite similar to the Bou Inania one but here we were on our own so that made it that much cooler.

Our next destination was the Chouara Tanneries. There are three tanneries in the city, but Chouara are the biggest. It was built in the 11th century and is still in operation today. This place is hard to miss as you can literally smell it when you’re getting closer. The stench is pretty bad. It’s best to visit the tanneries in the morning as there is most activity then. If you follow the red route through Fes el Bali, you’ll end up at the tanneries. You’ll see a direction sign leading you down but that’s not the place to be. There will also be men trying to lead you down but all they want is money, so instead just go left and walk around the tanneries to one of the balconies from the shops. You’ll of course be led through the leather shops but we found that the people there weren’t pushy at all. We even tried to offer a man some change as he had told us some history about the tanneries but he wouldn’t accept it.

And just like that our time in Fes was over. We would have loved to have some extra time to walk to the Borj Nord area where you can have a beautiful view over Fes el Bali from the Merenid Thombs. Also more time to browse some shops would have been nice. But considering my dad’s health the first day, we still managed to see quite a lot in about 24 hours. So if I say so myself we definitely made the best of it.

One thought on “When you only have 24 hours in Fes, Morocco”