Earlier in May, I spent three days in the lovely city of Copenhagen. If there is something that Denmark seems to be known for, it’s their castles. In the touristic center of the capital alone there are already three to be visited.

Luckily for me, I quite do like castles. So much so that I even travelled about an hour outside the center of Copenhagen to visit two absolute gems. 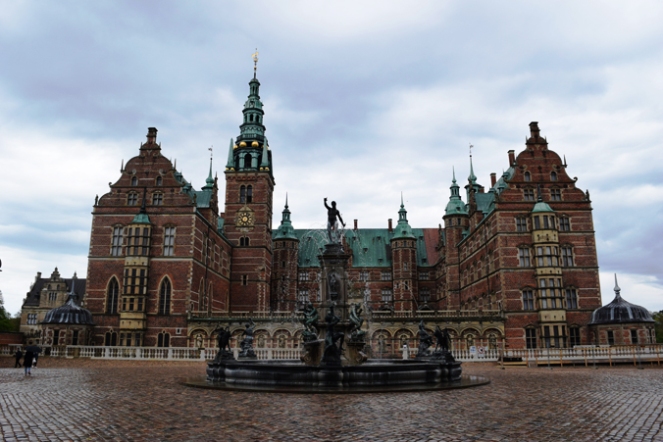 Before I left, I had done quite some research and many people said it would be nearly impossible to combine both castles in one day. I on the other hand found it quite easy to do so. I does come with some planning, but I never felt rushed. Note that I am not one who looks at every object on display but more at the rooms in their entirety.

After a quick breakfast at my hostel, I walked to the central station of Copenhagen where I would take the 8:27am train to my first castle of the day; Frederiksborg Castle. It takes 46 minutes from the central station to Hillerod St. From that station you can either take the bus (301 direction Ullerod or 302 direction Sophienlund) or walk about 20 minutes to the castle. Since it was raining when I arrived and the bus was just ready to depart, I of course chose the easiest option. For those opting to walk, if you walk outside the station, there are direction signs to the castle to your right.

Even though the castle itself only opened at 10am, I arrived a bit earlier at the gates. That because there is more to visit than just the inside of the castle. The surrounding gardens are wonderful to stroll through and are open before 10am. 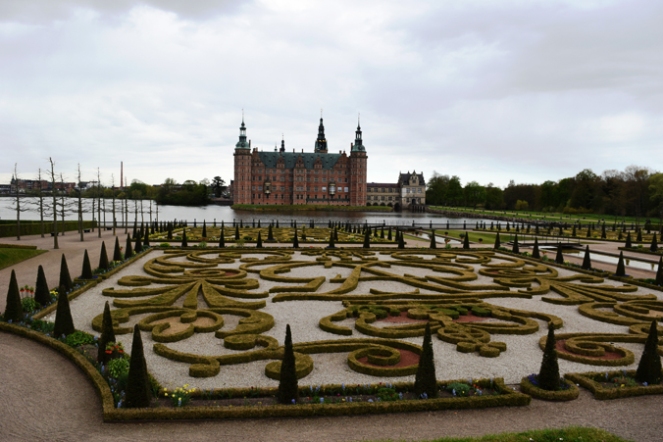 A little after 10am, I presented myself at the information desk of the castle to get my entrance ticket. There were already a few people and groups mingling around, but not too many. It was a Saturday after all.

Armed with the floor plan, I set out to explore this breathtaking 17th century castle . There are three floors open to public, all with a lot of beautifully decorated rooms. Amidst all that beauty, I of course got lost even though I didn’t seem that hard to follow the number of rooms. But I guess I got distracted by all that was on display. It literally left me stunned quite a lot of times. It was also so nice to be almost alone in most of the rooms as the groups all had started their tour after me. It made me feel less like a tourist and more like a guest. 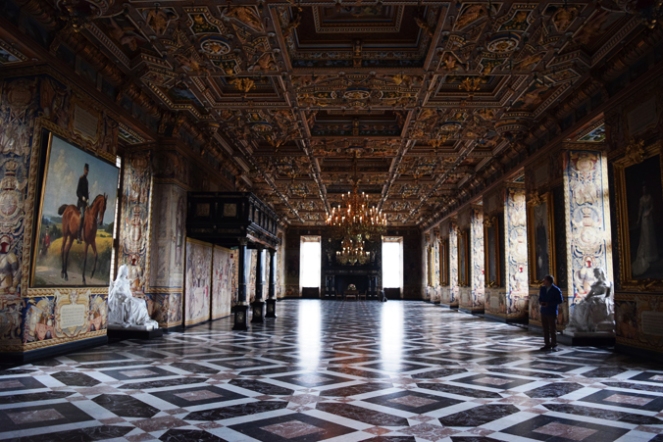 But what I loved most about this castle, is its gorgeous chapel. On the day I was visiting, it was displayed that the chapel was closed for a ceremony. That of course left me very frustrated. I couldn’t believe I’d have to miss out on it.

But much to my luck, just as I was done visiting the castle, the people were arriving for the ceremony and the doors to the chapel were already open. Since there was no sign prohibiting me from entering, I swiftly made my way inside for a quick glance. And that was definitely the icing on the cake. I can’t imagine not having seen it. 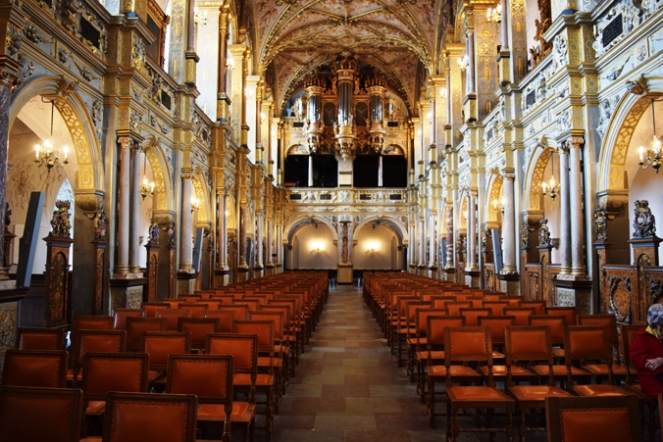 And with that my visit to Frederiksborg Castle was complete. Since the weather was clearing out a bit by then, I walked back along the water to the train station. There I would take the 12:57 pm train to Helsingor St.. This train only goes once every hour so make sure you don’t miss it. This is the reason why it may appear hard to combine both castles. If you miss the train, you’re immediately stuck in Hillerod for an hour. There might be another train to Helsingor on display, but you definitely shouldn’t take that one, as it takes more than double the time to get to your destination. Stick to the x:57 one and make sure you allow yourself enough time to make it to the station on time.

27 minutes later, I arrived at the train station closest to Kronborg Castle. Once again, it was another 15-20 minute walk to the entrance of the castle even though you can already see the building once you step outside the station. 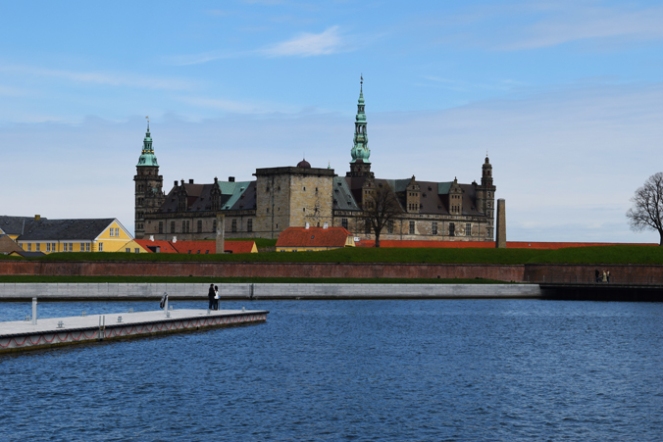 Kronborg Castle is mostly known for its appearance in Shakespeare’s Hamlet. Even today there are still performances of the play being held within those walls. Sadly there weren’t any playing at the time I was visiting. Also the free guided tour didn’t start for another hour so I decided to just set out on my own.

Kronborg Castle is clearly smaller than Frederiksborg Castle, but there are still quite a lot of points of interest available; The Royal Chambers, the Dungeons, the Chapel, the Tapestries and the Canon Tower.

I started with the Royal Chambers – as this sounded most interesting  to me – and was immediately surprised by how sober it was compared to Frederiksborg Castle. Yet it was still beautiful in its simplicity. It took me a lot less time to get through these chambers than those at the previous castle as there were less details to take in. One of the main sights in the Royal Chambers is definitely The Knights Hall; the longest hall in Europe. But many others rooms are also worth a visit. 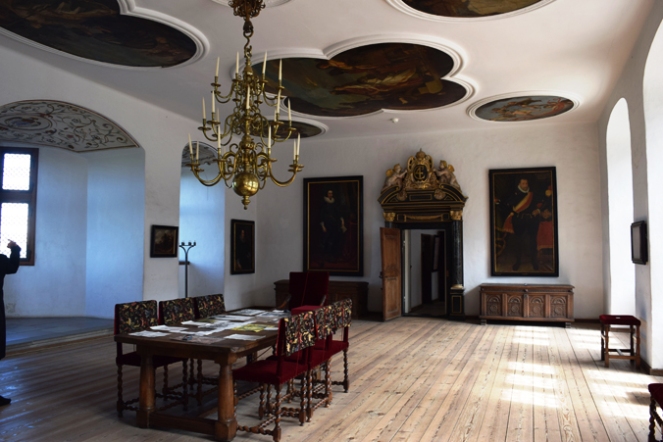 Next up I took the stairs to see the view from the Cannon Tower. It’s nothing really special, but it’s still worth the view.

And from the top, I then continued all the way down; down in the Dungeons. At the entrance you’re greeted by the statue of Holger The Dane and after that it’s pitch, pitch black. Thank god for the flashlight on my phone or I never would have found my way out. I must say I wasn’t completely at ease by myself there. But it was a really special feeling, wandering through the dark dungeons of this old 16th century castle. 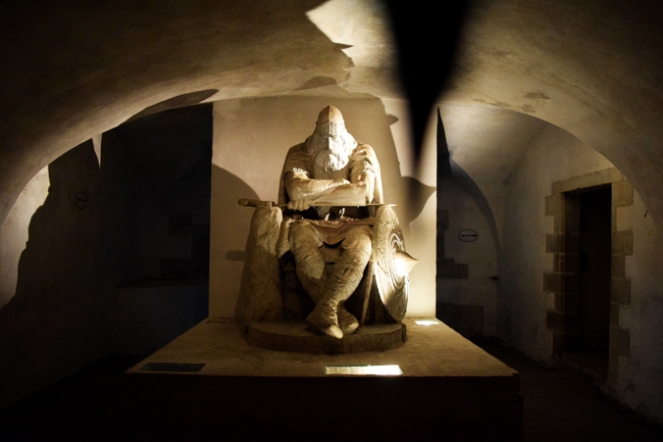 The Chapel was almost nothing compared to the one I’d seen earlier that day at Frederiksborg Castle but I would have been surprised to see that one topped within the same day. The Tapestries were also beautiful but nothing I hadn’t seen before. There were a few special pieces though so I’m glad I didn’t skip it completely.

For the remaining time I walked the grounds around the castle. You can go all the way around and that’s exactly what I did.

And then it was back to the train station to catch the train back to Copenhagen Central Station. I arrived back around 5:30pm so I still had a lovely evening ahead of me in Denmark’s Capital. So for me, it was perfectly doable to combine those two castles. As long as you’re not someone who wants to look at every single object and read every bit of information on display, you won’t even have to rush!

Entrance to both castles is included in the Copenhagen Card. This card is also valid as your train/ bus tickets so there are no extra costs involved if you have already purshased that card (which I highly recommend!).

One thought on “Day trip out of Copenhagen city center: Frederiksborg and Kronborg Castle”