After the two day trek through Sapa, it was time for some relaxing. And what better way to relax than enjoying a cruise through one of the most famous UNESCO heritage sites?

Halong Bay is one of the most visited places in all of Vietnam and it’s not hard to figure out why. The beautiful islands scattered through the bay make this a really unique place. It was one of the areas I had looked forward to the most. 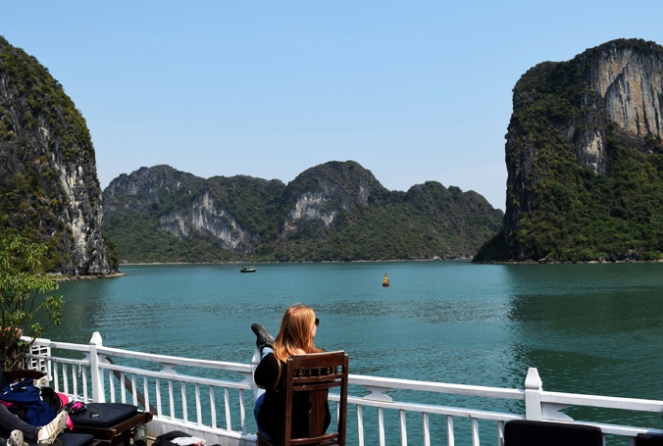 Halong Bay is one of those places where everyone just books a cruise from Hanoi as it’s the easiest way to discover the area. Only if you have more time, it’s better to just go to Cat Ba Island and start from there. Sadly we only had two days to discover this gem.

Once again we decided to book our cruise through Halong Bay once we had arrived in Hanoi. Online I had already read good reviews about Lily’s Travel Agency in Hanoi, so that’s where we ultimately booked our two day trip. We had also inquired prices at Sinh Tourist and other places but it was the personal touch and comprehensive information that we got at Lily’s that led us to favoring Lily’s Travel Agency.

For about 80 dollars each, we got a two day, one night cruise with Dragon Gold Cruise. This was the supposedly medium category cruise. There were many cheaper ones and also many more expensive options but we chose the medium one as I had read many reviews before that the cheaper ones are often quite bad, especially the food.

The first morning we and our other fellow travellers were picked up at our hotel and brought three hours away to the ferry terminal where our boat would depart. From a smaller boat, we then boarded our ‘home’ for the next two days.

At first we were a bit disappointed as the boat looked a bit rundown but as we looked around the bay, almost every boat looked the same. Only the really expensive cruises seemed to have a modern boat. Once on the boat, everything was perfectly fine. We had a triple cabin to ourself that was really clean and had everything we needed for one night. So don’t let the outside of the boat bring you down. Most of the boats cruising through the bay are of a certain age. 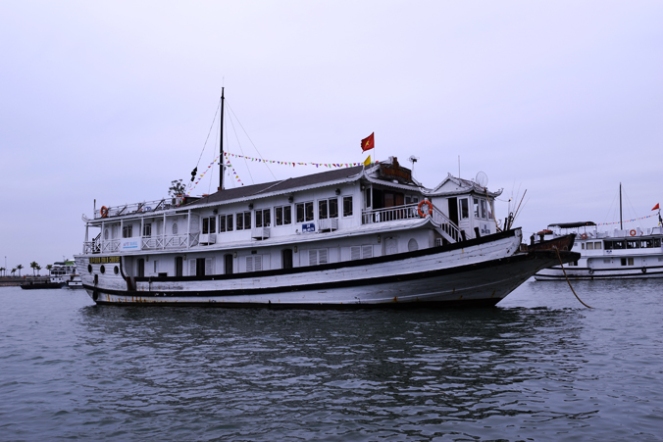 Immediately upon arrival we got a little welcoming drink and lunch. All food and all excursions were included in the price, but for drinks one had to pay. And of course those were rather expensive. Even our guide had advised us against ordering anything and just drink some water of our own in the cabin. And even though we had decided to pay a bit extra for our cruise, the food on the boat was definitely the worst I’d had on my entire trip through Vietnam. It was almost completely flavorless. So much for better food.

After lunch, it was time for our first excursion of the day; Ti Top Island. This island is situated in the heart of Halong Bay and is the perfect destination for swimming and climbing. Since the weather wasn’t that good, swimming wasn’t an option for us, but the climb to the top of the island was definitely worth it. The view over Halong Bay is unparalleled. If you’re booking a Halong Bay Cruise you have to make sure that a stop on Ti Top Island is included. You won’t regret it! 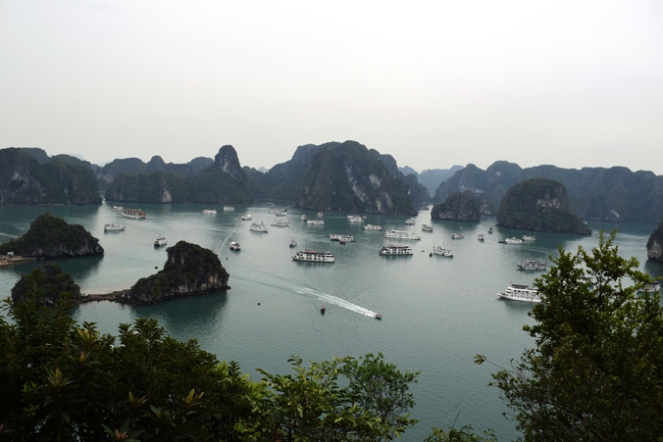 Half an hour later, we were already on the smaller boat again and sailed for our next stop; Sung Sot Cave also known as the ‘Surprise Grotto’. This is one of the two main caves in Halong Bay and supposedly the most beautiful one. On the way up to the entrance of the cave, you also have a really beautiful view over the bay. And then once you’re inside, get ready to be surprised. The cave starts out rather narrow but then continues to really large chambers. The lighting in the cave makes it all that extra special. It’s definitely worth a visit. 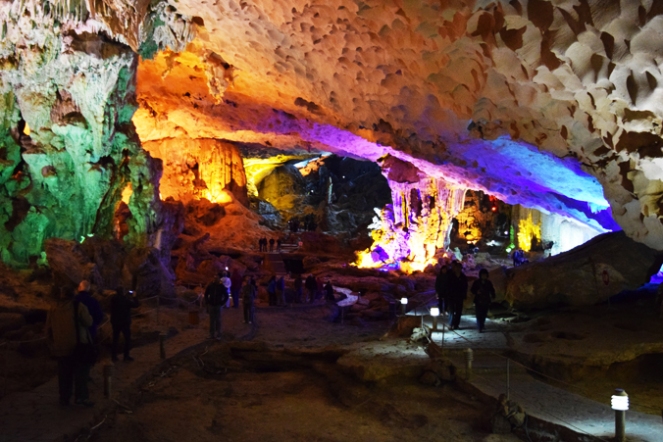 For the rest of the day we cruised through the beautiful scenery of the famous Halong Bay. Since it was a bit cloudy, we were a bit disappointed by the views. It probably didn’t help that it also wasn’t warm enough to lounge on the top deck. I guess we had expected a bit more of it.

Before dinner, it was time for another activity; cooking class. Or at least that was what was promised. Instead we just got to roll some vietnamese spring rolls while the ingredients were already prepared for us. So much for a cooking class…

And after another tasteless dinner, there was another -waste of time- activity planned; squid fishing. I don’t think there were actually any squids in the area where we were docked, but at least we had a good laugh at ourselves looking absolutely ridiculous with our fishing rods.

So after the visit to the cave, it had all gone downhill. We even missed the famous sunset over Halong Bay as it was soo cloudy. But the morning promised to be better. Early in the morning – before breakfast – we would go kayaking. Since it was that early, there were no other tourists in the area yet and we had the place to ourselves. It was one of the best experiences to just paddle slowly through nature. Another activity that you have to make sure you have included in our Halong Bay Cruise. 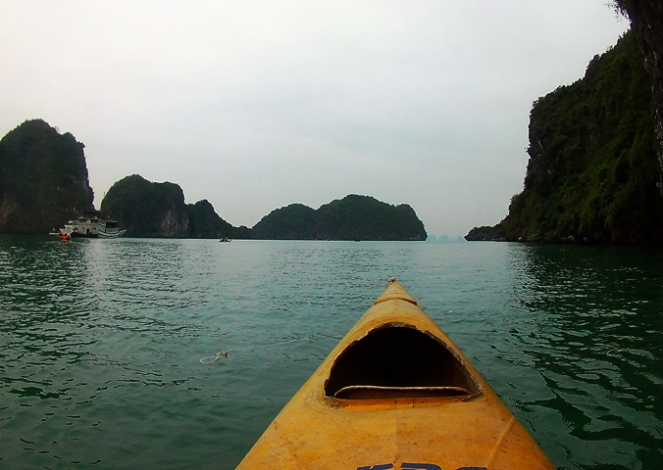 One mediocre breakfast later and we once again boarded the smaller boat for the next activity; visiting a Pearl Farm. This was a very touristy excursion as the pearl shop was bigger than the farm building. But still it was interesting to get at least a little information on how these pearls are “made”. 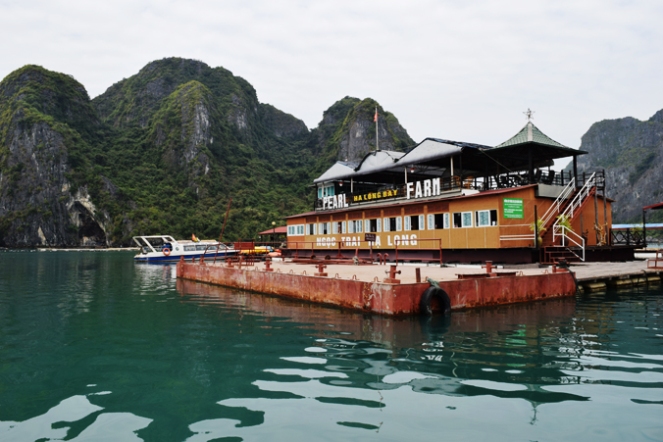 By then it was already 10am and time to head back to the terminal. And then suddenly luck was finally on our side. The sun made an appearance and all the clouds disappeared. For the last two hours we enjoyed the sunshine on the upper deck of our boat. And it was absolute bliss. Suddenly the environment became even much more beautiful and all the disappointment from before faded away. If only our entire time on the boat had been this sunny. But at least we still got those last two hours. 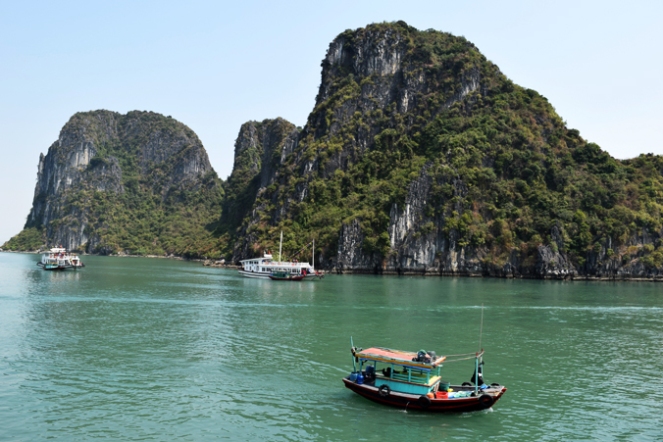 With weather like this, it was an absolute shame that we had to head back to Hanoi. I would have loved to spend a few more hours – if not days – cruising through this beautiful piece of nature. But all good things come to an end.

At first I was a bit disappointed by the famous Halong Bay, but a lot of it was due to the cloudy weather. I’m still sad that we didn’t get to see a lovely sunset, but the final two hours made up for most of it. Either way, Halong Bay is a must see whenever you’re in Vietnam.

As for the cruise itself, Dragon Gold Cruise, the main excursions (Ti Top Island, Sung Sot Cave and the kayaking) were really great, but the rest and definitely the food was nothing really to write home about. But apparently that’s the case on almost every boat in Halong Bay. So if you’re visiting Halong Bay, prepare for a two-day diet and some odd extras. At least you’re surrounded by gorgeous views of the bay, which make this all very much worth it.