Let’s go back one week in time. I was busy preparing for my first solo trip to Copenhagen when my friend suddenly linked me this article on Thomas Dambo’s Forgotten Giants.

I was immediately sold. Even though my planning was already more than overflowing with things I wanted to do in the city, I couldn’t stop myself from including the hunt for one of the cool wooden sculptures. 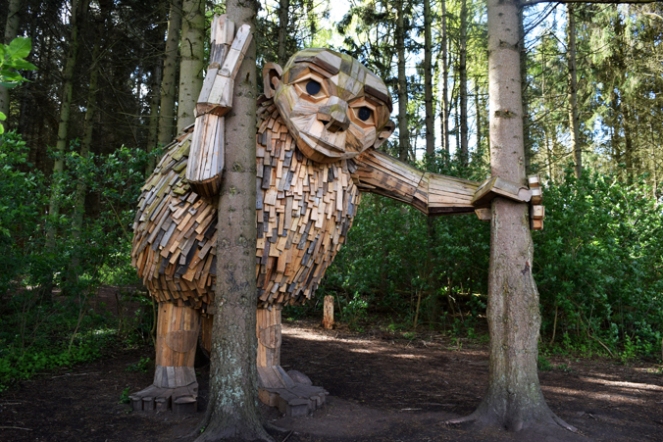 Thomas Dambo is a Danish artist and designer who specializes in making art from trash and recycled materials. He’s already made several projects for organisations in Denmark – such as Roskilde Festival – but his work can also be found abroad.

With the project of the Forgotten Giants, he decided to bring the art outside of the museum and into nature. On six overlooked nature spots in the western part of Copenhagen he hid six wooden sculptures. All of them are made from scrap wood and with the help of volunteers. Such a great concept I couldn’t just ignore.

Based on what giant I found the cutest and was best reachable with public transport, I decided to go hunt for ‘Little Tilde‘. After a twenty minute train ride (The B s-tog in direction of Høje-Taastrup – Stop Albertslund) and a two kilometer walk I arrived in the area of Vallensbæk Mose where this ‘little’ giant was supposedly hiding. Armed with the map that Thomas provided for the hunt, I ducked into the woods. Luckily, it was very clear where I had to look so in no time I found this forgotten giant.

It might not be something typical of Copenhagen, but it was such a cool concept that I just couldn’t help myself. It took me about two hours to get to the area and find the giant. Even though I was already short on time, I certainly don’t regret the hunt. It brought me to the outskirts of the city to some more quiet and greener area of Copenhagen where I wouldn’t have gone otherwise.