When I start looking for a hotel to stay at during a citytrip -or basically any other trip- there is one thing that I care about most; location. Location location location.

The best orientation point to visit the city is always my focal point, so usually I end up searching for a cheap solution as close to the middle of the center as possible. It seemed obvious that the closer you are to the hightlights, the more time you’d be able to actually spend on those hightlights.

Yet when I went to Berlin and stayed at the Alecsa Hotel am Olympiastadion with my parents back in the summer of 2013, I found out that that isn’t always the best option. 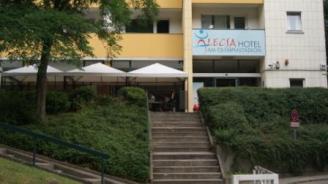 When I first heard that we would be staying in the outskirts of Berlin during our three day stay at the city, I couldn’t believe what I was hearing. Over ten kilometers away from the center?! We only had three days to discover Germany’s capital and we’d have to spend time actually getting to the center every day?! To say I wasn’t a big fan would be an understatement.

Of course with two teenage daughters tagging along, my dad had chosen this hotel to lower the budget of the trip a bit, but most of all, it was a well considered option which proved very smart in the end.

First of all, we were driving to Berlin so we needed a parking spot to leave our car overnight. Finding a hotel with a parking spot in any city center is quite a hardship. You either overpay just to be able to park your car or you’ll end up in a shady place. Both options don’t really appeal to me for obvious reasons.

Secondly and most importantly, Berlin is quite a big city and many of the sightseeing spots are quite a distance from one another. Then it’s nearly impossible to just walk everywhere and you will have to take the metro or public transport at one point anyway. Alecsa Hotel might have been quite a bit away from all those highlights but (yes the big but!) it was really close to a metro station. And that is what you should be looking for.

This way we were able to divide Berlin into three parts – one for each day – and just travel to each part by metro, visit everything there and go back at the end of the day. Easy peasy! With another hotel closer to the center we might have ended up close to one or two highlights, but then having to walk quite a long time to a metro station first to get to those places further way. Now we were on the metro in no time and since the line was very frequently operated and quite fast we got everywhere we wanted to go in only about fifteen minutes. It was amazing!

Aside from all those advantages, hotels out of the city center are also nicer on the budget and usually you get more value for your money. Win-win!

So back then I learned that location still is everything, but location doesn’t always mean that you have to look for the hotel right in the middle of the center. Whenever you’re in a big city, it’s more important to look for a place close to a metro station instead of smack next to one of the biggest highlights but further away from other things you want to see and with no close means of transport to go see them. Only thing you have to take into account is the hours of the public transport, but usually in big cities that isn’t very much an issue unless you’d like to stay out until well in the night.

So I’m definitely saying yes to staying outside the city center if I can get these avantages! And the cheaper accomodation is always a welcome extra.

Do any of you have any experiences with staying out of the city center? Yay or nay?

One thought on “A hotel out of the city center? Yes!”