On the second day of our trip, we left the beautiful Tuscany and headed north to Liguria to go visit the villages of Cinque Terre. Cinque Terre literally means “Five Cities’ in Italian, and those five cities are called Riomaggiore, Manarola, Vernazza, Corniglia and Monterosso al Mare.

Since 1997 these towns are on the UNESCO World Heritage Site list and together with the coast and the surrounding hills they form the ‘Cinque Terre National Park’.

Each one of those villages look like they’ve come right of a postcard and the area is just so breathtakingly beautiful. It’s simply a stunning part of Italy.

Since we visited this place in November when the days aren’t all that long, we got up rather early to make our journey up north. We arrived at the first town, Riomaggiore, around 10 am.

We went by car because we had the rental at our disposal anyway, but finding a nearby parking space in all of these villages proved really tricky. Most of the town centers are pedestrian area only and the car parks are often quite a walk from the center. Luckily it was low season so we managed to find car park space within walking distance eventually. But in summer it might be a bit harder since there are more tourists then, so during that time of the year it might be easier to take the option of visiting the villages by train.There is a line that connects all villages and the train station is always right in the city center.

Initially, we wanted to do the coastal walking route of about 10 km that also connects all the villages, and then head back from the last town to the first one, but unfortunately the route between Riomaggiore and Manarola and Manarola and Corniglia was closed due to mud slides and falling rocks. There were a few alternatives, but some of the trails are quite strenuous so only for the trained walker.For that reason we ended up going from one town to another by car, but that definitely wasn’t an ideal option.

Anyway, the first village of Cinque Terre we visited was Riomaggiore and this was already one of my favorites. The postcard worthy place of the town is down at the harbor. There you have a stunning view on the boats and the many colorful houses of the village.

But aside from that, the actual town is lovely as well. It’s nice to just let yourself get lost for a while in the small streets of the villages.

The next village is called Manarola and is really close to Riomaggiore. Between those two villages you can find the most famous walking trail of Cinque Terre, namely Via Dell’Amore (Love walk). But as I said before, that trail was unfortunately closed at the time we visited.

Once again you have the most beautiful view on the town from the harbor, and the most “famous” view you get when you take a bit of the trail to the next town. For us the sun was a bit bad positioned, but still, such an amazing sight!

The second to last village is Vernazza. Once again the harbor is the most stunning part of the town, but it’s also definitely worth it to go up the Doria Castle. This castle was built in the 15th century and dominates the village by the big tower (Belforte) which can be seen from the harbor. There you get an amazing view on both the village but also the coast. Entrance costs €1,5 and the walk up is through narrow streets and quite streneous but the view is worth that small price and the little work-out. 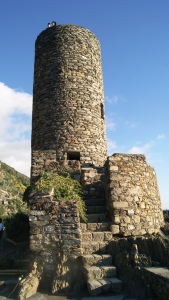 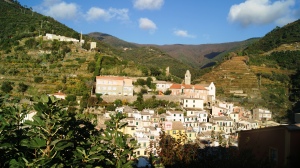 The last village is Monterosso al Mar. Compared to the others, this is a lot less impressive in my opinion. It doesn’t have the colorful houses or the postcard views, but you can’t of course go to Cinque Terre without visiting all the cities.

Sadly we didn’t have enough time to spend more time in every single city and it did feel a bit rushed but it was definitely the best day of our trip. I simply adored these cities. A definite must when you’re in the area.

And if you’re visiting in summer and the days are a bit longer, you definitely have to head to Porto Venere after visiting Cinque Terre. We went back to Liguria the day after to go see that town since we had already heard plenty of great things about it from friends. And it was just so beautiful.

We did have a bit more time to visit this place so we went to many viewing points and even visited the castle (from where you also get a lovely view). The marina and church both offer such amazing views. I couldn’t get enough of it. 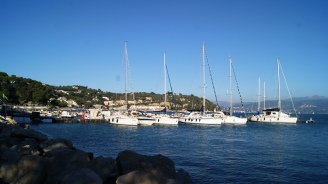 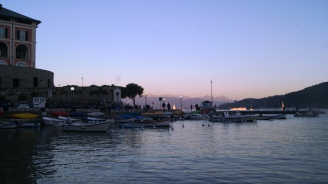 As you can see, a really picture friendly place. A town you just can’t miss when you’re in the neighborhood!

Oh how this hurts. Right now I was supposed to have just landed in the beautiful city of #Lisbon. In the best of form and 100% ready to tackle the triathlon challenge in two days. Instead I'm at home, hating the everliving shit out of our current situation. Fuck you #covid19 !
March into April, April into May. Time ticks on, merciless. But I'm so happy that here in #Belgium we're allowed again to drive a little distance to a #park or forest to exercise. 🌳 I've missed the view on this beautiful #basilica and consider myself lucky to have places like these nearby. Starting this Sunday we'll also be allowed to see a maximum of four other people, which sounds like music to my ears. After almost eight weeks of lockdown on my own, I've been craving some social interaction! I just hope that people won't take advantage and do more than is allowed. I just can't see how I'd cope with going back a step... Anyway, hope you are all safe and will remain safe! We've already gotten so far, so let's continue to stick together and beat this awful virus together 🤗
Five years ago I was now on my way to the beautiful city of #Amsterdam 🌷 for a two day getaway with some of the best people in my life. While a #throwback 🔙 usually makes me long for the prospect of revisiting cities and places, I'm now so much more counting down to the time I can just meet up with my friends again. 😔
Six weeks in quarantine have passed and this whole situation still feels surreal. But even after all those weeks, I'm still discovering new places and roads in my hometown. I could get used to lunch walks like these. As a matter of fact, I kind of already have! Nonetheless I'm dying to see my friends and family again, as it is getting quite lonely at home on my own. Hopefully we'll see a light at the end of the tunnel soon but in the meantime, stay home and stay safe! 🤗
It frustrates and saddens me beyond belief how people are taking advantage of the little freedom we still have to exercise outside to go visit family and friends by foot of by bike. Yes, I'm sad too that I wasn't able to visit my parents and grandparents over the Easter weekend, but I stayed home because that's the only way to see them again as soon as possible, in a healthy world. Visiting people now is so f*cking selfish and will only result in a longer lockdown and a cancellation of the whole summer. Be smart; STAY HOME!
COVID-19 got us all stuck at home, but instead of letting my head hang and sulk about my cancelled triatlon and trip to Lisbon (and possibly even Australia), I'm taking this period of time to find some inner peace and mostly discover the little gems of my hometown. 🌼 I'm very lucky to live on the countryside, so nature is all around me. It's nothing like the Grand Canyon or the Rocky Mountains, but in times like these, it becomes a lot easier to appreciate the little things in life. ☺️ I hope all of you and your loved ones are safe and healthy. It's never been easier to save lives; just stay home! Stay home and be grateful of all you have. The better we follow the rules, the sooner we'll be able to explore our wonderful earth again! 🗺️ Stay safe and happy near-your-home wanderings! 😘
%d bloggers like this:
%d bloggers like this: