On the first night of our Italy roadtrip, we stayed in Lucca. Lucca is a city a bit north of Pisa, and while it’s not as famous as Pisa it’s definitely worth a visit. I found it to be even more beautiful than Pisa.

It’s one of the richest cities of North Italy and has thousants of years of history dating back before the birth of Christ. It’s most famous for its city walls that go around the entire city but there are plenty of other sights to see as well.

We started our walk through Lucca by the Porta di S. Jacopo since that one was closest to our hotel. We continued down along the Via Del Fosso. This street is really recognisable because of the canal that runs along it. This canal was built in the fourteenth century and served to protect the east side of the city.

We found a great city walk at the gate on the intersection of Via del Fosso and Via Santa Croce. We followed that route and found that Lucca has many beautiful streets and places.

The most remarkable feature about the city are the three towers; the clock tower, the Guinigi Tower and the tower of the Duomo di San Martino. When we were visiting in November, the Clock Tower was already closed for the season and sadly, they were renovating the Duomo. But you of course have to go close to the Duomo as it’s still such a stunning building.

But we did visit the Guinigi Tower. Entrance was four euros and the view on the city was simply stunning and definitely worth the strenuous climb up. It’s also a really remarkable tower because there are trees on top of it.

Sadly many of the squares were occupied by tents as some sort of large event was taking place in the city. It kind of ruined the old atmosphere of the city, so we tried to avoid those square as much as possible. This way we couldn’t really get a good look of the Palazzo Ducale on the Piazza Napoleone. Luckily one of the most beautiful squares with the Chiesa di San Michele in Foro was entirely free. That building is simply marvelling.

After a short coffee break on that lovely square, we headed to the Palazzo Mansi. This palace has a museum inside now but mostly it’s impressive for the building itself. We didn’t go in as the museum didn’t interest us, but luckily there was a free exhibition going on so we were able to get a quick glance of this palace.

From there we headed along the shopping street, Via Fillungo, to the Piazza dell’Anfiteatro. On the place of the square there used to be a second century Roman amphitheatre. The amphitheatre is now gone but the buildings on the square still follow the shape of the theatre. One of the most special squares I’ve ever seen.

Since it was getting dark rather quickly, we then went to check in at the hotel. We stayed two nights in Lucca in Villa San Marco. This is an appartment complex consisting of three little apartments. Ours had one double bed, a single bed, a bathroom and our own kitchen with plenty of equipment. Breakfast was not included, but since the appartment is situated right outside of the city walls, you can easily go find breakfast inside the historical city. For two nights, we paid 120 euros for three people and it’s one of the best hotels I’ve ever stayed in. Especially since they had free bikes for use. One morning we used them to cycle the entire city wall and it was just lovely. Really amazing extra to that hotel! 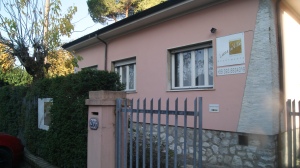 The owner of the hotel also recommended two restaurants which we of course both checked out. The first one was Allosteria, which can be found on Via Sant’Andrea. This is a more fancy restaurant with a quite specific menu and a bit more expensive than your usual Italian restaurant. Unfortunately it wasn’t all perfect. My medium cooked meat was rare while my dad’s medium was overdone. But other than that it was really tasty so no regrets. 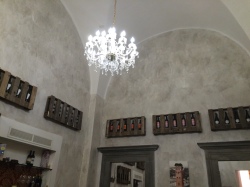 The second restaurant was more my kind of style; Trattoria Gosto e Mea on Via Borgo Giannotti. They have a more simple menu, in a lower price category but damn delicious food. Definitely wish I could go back there.

And that was it for Lucca, I guess. If you have any questions or remarks, you know where to find me! Next up will be my favorite part about this trip; Cinque Terre and Portovenere!