The last post – for now – on my own country, Belgium, will feature another one of my favorite cities; Ghent. 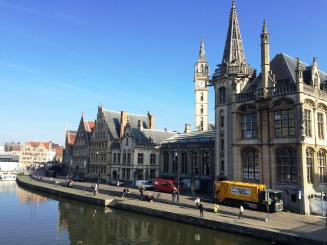 The city  of Ghent started as a settlement at the confluence of the Rivers Scheldt and Leie and in the late Middle Ages became one of the largest and richest cities of northern Europe. Just as Bruges, it’s also a very scenic city.

Once again, we went to Ghent by train as it’s far easier than braving the trafic and finding a parking spot. But in Ghent the city center is actually quite far away from the train station, so walking would have cost us a lot of time (which we didn’t have). Instead we took tramline number 1, of which the stop can be find in front of train station, to the Korenmarkt. This takes about 10-15 minutes and you’re dropped off right in the center of the city.

One of the most famous sights of Ghent are the three towers, namely the Belfry, the Saint Nicholas Church and the Saint Bavo Cathedral. You can spot them best from the Korenmarkt.

You can visit the Belfry of Ghent, which is the largest Belfry in Belgium, for only two euros (if you’re 19-25 years old). From the top, you can an amazing view on the city. The construction of the tower started in 1313 and since 1999 it’s on the UNESCO world heritage list. 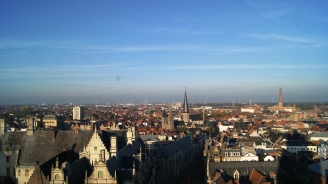 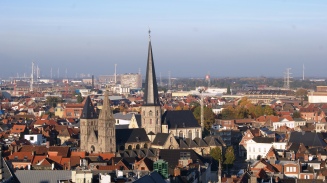 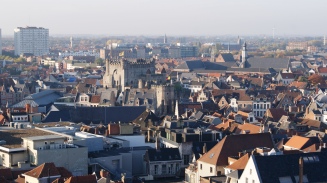 The second tower of the three towers belongs to the Saint Bavo Cathedral. You definitely have to visit the church as it’s really impressive. If you’re interested in art, you can also visit the chapel and go see ‘The Adoration of the Mystic Lamb’ by Hubert and Jan Van Eyck. Entrance to the catheral is free, but the chapel costs 4 euros. 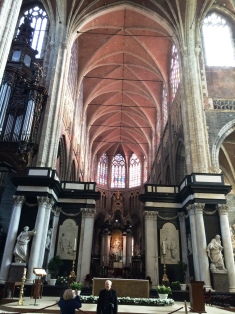 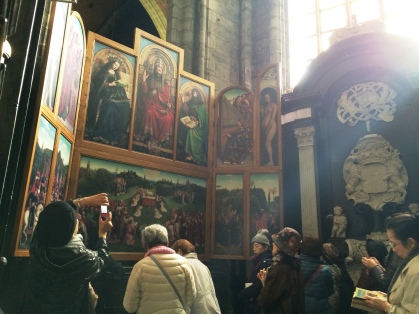 By then it was time for lunch, which I love to have at Ellis’ Burgers on the Korenmarkt. They have the most amazing, fresh burgers and their kiwi-lime lemonade is simply to die for.

With a full belly, we headed for one of the most scenic places of Ghent: the Graslei and Korenlei. It’s situated along the water and has the most beautiful houses. This is my favorite spot to just sit and relax. It’s also the place where the youth likes to hang out. 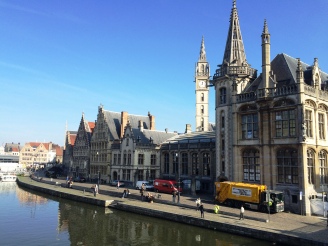 Continuing along the water, and a bit further down the streets of Ghent, you’ll find the Gravensteen (Castle of the Counts). This medieval castle is the only one in Flanders that remained as intact as is it. From the outer walls and the towers of the Gravensteen, you can also admire the lovely city of Ghent.

Inside the castle, there is also a court and weapon museum with a whole room dedictaded to torture techniques. 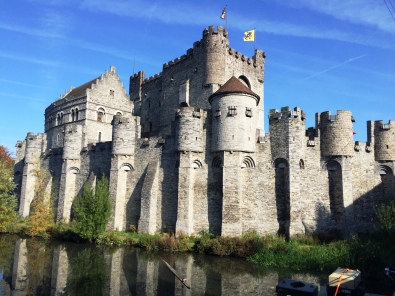 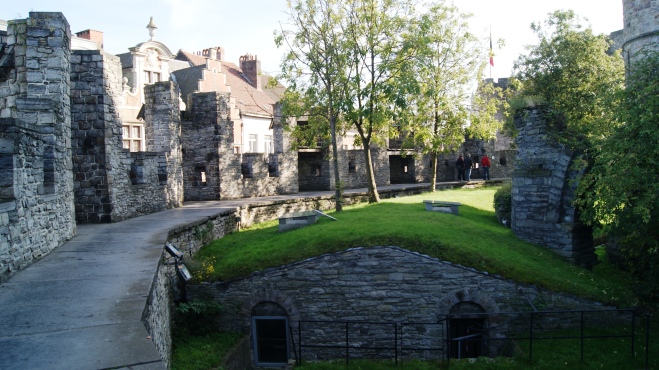 After escaping the fortress, we continued towards the Lievekaai. There isn’t anything all that special about that place except that it’s really beautiful and a nice place to relax for a moment.

Next we purposely got lost in the streets of Patershol. This is an old district in Ghent dating back to the Middle Ages. From there we ended up along the water of the Kraanlei. This is also a really lovely spot.

Crossing the bridge over the water, you’ll end up at the Vrijdagsmarkt. This is one of the oldest squares of the city. In the middle of the square you find the statue of Jacob van Artvelde and in the corner The Dulle Griet, a 15th century old bombarde. 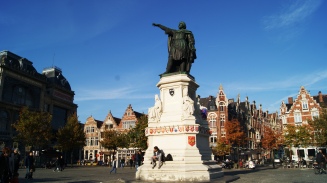 And then we headed back to the Korenmarkt to catch the tram back to the train station and thus ending our time together in Belgium. This will also be the last post on Belgium in this series. I will try to blog as much as possible on my country in the future whenever I visit a place, monument or site. So stay tuned!

I’m Ellen, a 26 year old Belgian girl with a passion for travelling and a need to have seen it all.

Three years ago I was now on my way back home from #London, after an over the top amazing three day weekend with my best friends. 💂 Last year I was also lucky to visit this metropole twice, once again with amazing company. I adore traveling with friends and family, but for next year I'm still hoping to make my first big solo trip to Australia happen. 🇦🇺 I've been selected to participate in a Olympic Triatlon in Lisbon, so that's gonna take up most of my time the next few months. No more time for that extra job that was helping me save up for that Australia trip... But I'm gonna do whatever I can to make it happen anyway and I'm hopeful that I'll succeed! 💪🏻 But right now, I'm looking forward to a long weekend in Vienna with my bf in two weeks. 🇦🇹 It sure looks like it'll be a crazy, unforgettable year. 2020, I'm ready for you! 🥂
Hiking along the #Romsdaleggen #ridge was definitely the best experience of our #roadtrip through #Norway and it probably was the highlight of the past year for me. Being surrounded by sort-like views for an entire day was nothing short of spectacular. No words or pictures could do this place justice, but I've tried to in my lastest blogpost, to which you can once again find a link in my bio.
It's been three months ago that we were driving through this beautiful scenery of the #GamleStrynefjellsvegen in #Norway. I've been slacking a lot more than usual when it comes to updating my blog, but another one of this road and the Loen Skylift up to Mount Hoven was posted tonight.
The sun setting over #Ghent tonight 😍 Moments like these make me realize there is still so much beauty close to home to discover. Today I went to Ghent to buy new running shoes, and while we were there I wanted to stretch my legs for a while some place other then my usual walking routes. So I just navigated ourselves to the nearest park. With this result. Pretty neat huh? What more does one need on a Monday evening? 😊
When you're traveling up North, you can be certain that not all your days will be sunny. Sadly we didn't see a miracle and ended up with three days of rainfall in a row when we were traveling through #Norway last September. While it does make you a bit gloomy, it's still worth it to get out there anyway and try to make the best out of it. In my new blogpost (link in bio as usual) you can now read all about how we spend our three rainy days in the #Norwegian #Fjords.
#Ghent by night last night. Isn't this lovely? 😍 I just love strolling through this city when it's dark. You only need the appropriate, warm clothing this time of the year to prevent your fingers and toes from falling off 😅
%d bloggers like this:
%d bloggers like this: