For our second day in Dublin/ Ireland, we had booked a day trip to Cliffs of Moher with Irish Day Tours. 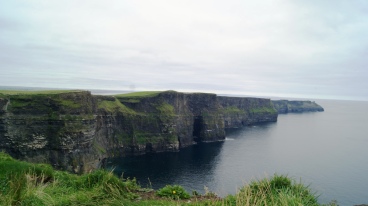 The Cliffs of Moher are -surprise- cliffs which are situated on the west coast of Ireland, in the county Clare. They rise over 200 meters above sea level at the highest point and are one of Ireland’s most popular tourist attractions with over a million visitors a year. The cliffs also briefly appeared in Harry Potter and the Half-blood Prince so of course I had to go see them!

And I certainly don’t regret that I did. They’re such a beautiful piece of nature.

Since the cliffs are located on the west coast of Ireland, and Dublin is on the east side, you of course have a long bus trip ahead of you. It takes about three hours to cross Ireland, but with Irish Day Tours there are quite a few stops to make the trip a little less lengthy.

Our guide for the day, Phil, was also really great at making the bus trip way more interesting. He had amazing facts about certain places we passed by bus but managed to keep them all short so it wouldn’t become too much. Perfect guide.

The first stop is just a “grab-a-coffee-at-a-rest-stop”-stop, but it’s already at a place with some meaning. It’s the Barack Obama plaza. The American president in fact does have Irish roots, and in 2011 he did visit Moneygall, the place where his great-great-great-great grandfather came from.

Then it was back on the bus, and off to the next stop, which was King John’s Castle in Limerick. Once again only a fifteen minute stop to stretch the legs and take a quick look at the 13th century castle. 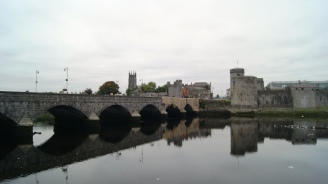 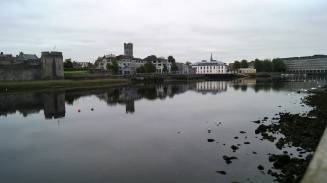 From there, it was in one straight line to the beautiful Cliffs of Moher. We got one hour and a half to wander around the area, which is plenty of time to go see the most lovely views. You should definitely go up to O’Brien Tower, at which point the cliffs are the highest. The tower was built in 1835 and served as an observation tower. 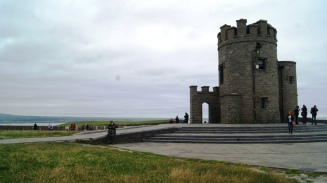 If our time hadn’t been limited by the bus driver, I swear I could have stared at this wonder of nature for the rest of my life. But we did have more to see, so it was time to hit the road.

After a quick stop for lunch, we drove on along the west coast of Ireland to a place called Grimlin, also known as the ‘Mini-Cliffs’. These aren’t as spectacular as the Cliffs of Moher, but they’re beautiful on their own as well. Definitely worth a stop.

But while we didn’t stop everywhere, there were so many lovely places we passed. I tried to take a few pictures, but of course the window of the bus often was a bitch.

Our second to last stop before heading back to Dublin, was the Corcomroe Abbey, a 13th century cisterian monastary. I was mostly intrigued by one tomb stone on the graveyard, which has such a lovely inscription.

Last we headed to Dunguaire Castle near Kinvarra. This is a 16th century tower house which is 75 meters high. It isn’t all that impressive, but it’s a lovely scenery. 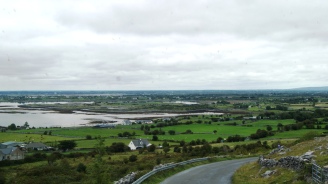 By 7pm, we were back in Dublin. Just in time to grab some dinner to finish this amazing day.

The “Cliffs of Moher’ day tour of Irish Day Tours departs every day from the Molly Malone statue in the center of Dublin at 6:50 am. The actual busses are waiting on Dame Street, but the meeting point is the statue. From there, the guide will take you to the busses. Make sure you are early (even earlier than the 6:40am they recommend) so you can get a nice seat on the bus and can sit together with your friends/ family. This tour costs 45 euros for one adult, which I think it an amazing price for what you get. I definitely recommend this tour and would definitely use this day tour company again. Perfect way to explore another bit of Ireland while in Dublin.

Oh someone please take me back to times where I wasn't anxious about when we'd finally be allowed to travel and marvel at gorgeous views like these...🏞️ I miss the carefree, overjoyed feeling I have when traveling. I miss meeting new people from all over the globe, even if it's just for one evening. I miss the excitement of looking forward and counting down to a trip. But mostly I miss being in awe of earth's beauty and wonders of nature. 😔 I realize I've taken all of the above too much for granted and haven't appreciated it enough. We're at war with nature now, and more than ever we should work together to find a way to live in harmony and protect our precious environment. Save water, consume less, reduce waste, avoid toxic products,...🚫 There are many small things that can be done that have such a big impact on our planet's health. We shouldn't wait until it's too late. It's time to act now, or this pandemic could end up being the least of our worries...
Oh how this hurts. Right now I was supposed to have just landed in the beautiful city of #Lisbon. In the best of form and 100% ready to tackle the triathlon challenge in two days. Instead I'm at home, hating the everliving shit out of our current situation. Fuck you #covid19 !
March into April, April into May. Time ticks on, merciless. But I'm so happy that here in #Belgium we're allowed again to drive a little distance to a #park or forest to exercise. 🌳 I've missed the view on this beautiful #basilica and consider myself lucky to have places like these nearby. Starting this Sunday we'll also be allowed to see a maximum of four other people, which sounds like music to my ears. After almost eight weeks of lockdown on my own, I've been craving some social interaction! I just hope that people won't take advantage and do more than is allowed. I just can't see how I'd cope with going back a step... Anyway, hope you are all safe and will remain safe! We've already gotten so far, so let's continue to stick together and beat this awful virus together 🤗
Five years ago I was now on my way to the beautiful city of #Amsterdam 🌷 for a two day getaway with some of the best people in my life. While a #throwback 🔙 usually makes me long for the prospect of revisiting cities and places, I'm now so much more counting down to the time I can just meet up with my friends again. 😔
Six weeks in quarantine have passed and this whole situation still feels surreal. But even after all those weeks, I'm still discovering new places and roads in my hometown. I could get used to lunch walks like these. As a matter of fact, I kind of already have! Nonetheless I'm dying to see my friends and family again, as it is getting quite lonely at home on my own. Hopefully we'll see a light at the end of the tunnel soon but in the meantime, stay home and stay safe! 🤗
It frustrates and saddens me beyond belief how people are taking advantage of the little freedom we still have to exercise outside to go visit family and friends by foot of by bike. Yes, I'm sad too that I wasn't able to visit my parents and grandparents over the Easter weekend, but I stayed home because that's the only way to see them again as soon as possible, in a healthy world. Visiting people now is so f*cking selfish and will only result in a longer lockdown and a cancellation of the whole summer. Be smart; STAY HOME!
%d bloggers like this:
%d bloggers like this: