Last week, I was finally able to cross of Dublin and a few sights in Ireland off my bucket list. And you can be sure that I had an amazing time doing it.

Dublin is the capital of Ireland and is situated on the east coast of the country. The city is separated in half by the river ‘Liffey’. It was founded around 988 by the Vikings and now it has grown until a city with more than half a million inhabitants.

Since Dublin isn’t such a big city, we decided to add two daytrips in Ireland to our trip to fill our days. 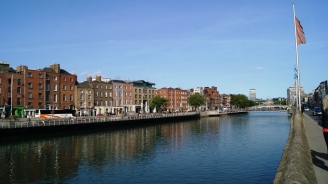 By now, I guess you all know how I review my trips. And this time it’ll be no different.

I assumed it would be a disgrace to fly to Ireland with any other airline company thanRyanair. The prices were also the cheapest and so far I have never have a bad experience with this company. I read in a recent study that Ryanair is among the least liked because of unfriendly staff, but I personally have never been treated unfriendly or different than on any other airline company.

So yes, still a big fan of Ryanair.

In Dublin, we stayed four nights in the Sky Backpackers Hostel. This hostel used to be a recording studio that hosted names as U2, Sinead O’Connor, David Bowie, Van Morrison and The Cranberries.

It’s a very modern, young looking hostel, with all the basic stuff one needs. What makes this the most interesting place to stay, is most definitely the location. It’s right at the Liffey in the middle of the center of Dublin and only a couple of minutes away from the main stop of the Airlink (see below).

As for the facilities; it’s minimal. You don’t get any closets or shelves to put your clothers or other stuff away. But if you have a private room – which I still prefer over sleeping in a shared facility –  you get quite a lot of space and a spacious bathroom as well. For me, that’s all I need.

The atmosphere in the hostel was also really amazing, but we did get a lot of noise from the hotel bar across the street that had live music every evening.

But definitely a hostel I recommend for those who are just looking for a place to sleep. 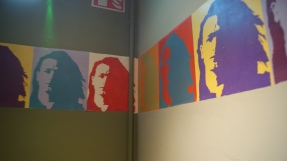 To get from the airport to Dublin center, we took the Airlink Bus. This bus leaves every 15 -20 minutes and takes about 40 minutes to get to the center of the city. It costs only 6 euro one way, and 10 euros both ways. There is also wifi available on the bus so you can notify everyone of your arrival. I would definitely use this bus again as it was just so easy and for an amazing price.

And that’s all for the general part. More soon!