As I’ve mentioned in one of my previous posts, I spent a few days in London last week. It was my fourth time in United Kingdom’s capital and once again I fell in love with this city. It’s one of my favorite – if not my favorite – city I’ve ever been to. (Ha, I’m so original!)

Even thought I have been many times, I still haven’t done all the highlights in this city (Horrible, I know!). This time however, I’ve been able to scratch off many of my list, but I still haven’t been able to do the London Eye or Westminster Abbey. One day, though, one day!

Anyway, it took me a while to figure out how I wanted to structure my review of London as I only wanted to post one actual blogpost (similar to what I did with the Paris one). But since I haven’t been able to do everything in this city yet, I found it hard to give you a top 10 of my favorite places already.

Instead, I’ll just list up the things that I have done on this trip (aside from Harry Potter Studios as I’ve already discussed this obviously!) and hopefully one day I’ll be able to give you all a full overview of my favorite London.

The first stop of my trip was the Tower of London. While it is one of the must does in London, I never actually managed to squeeze it in my schedule the previous times. I guess the entrance fee might have been the issue. It’s quite pricey, but when you buy your tickets in advance online, you can save a few euros. We got them for £21, which is about €30. So yes, that’s quite a lot, but I don’t regret spending it as I had a really interesting visit.

We started our tour with a visit of the Crown Jewels. It’s best to do that first thing upon arrival as it’s the most impressive part of the Tower and it can get really crowdy there. Unfortunately you don’t get to admire the jewels, rubies, diamonds and other bling bling very long as you’re passing it on an autowalk to keep the crowd from staring too long. But still, you just can’t visit the Tower of London without seeing the Crown Jewels. (Note: You can’t take pictures of the jewels *insert sad face*)

If you have about two hours to visit the Tower, I definitely recommend going on aYeoman Warder tour.  Back in the day, Yeoman Warders or Beefeaters were the guardians of the Tower, its prisoners and of course the Crown Jewels. Nowadays, they’re just a tourist attraction and mostly; tour guides. Every half an hour you can go on a free guided tour by one of these Yeoman Warders. They will tell you more about the history of England and The Tower. The tour lasts about an hour and it’s a really cool way to visit the tower as the humor of these Beefeaters is brilliant. Our guide John was simply hilarious.

And if you don’t mind doing a lot of stairs, it’s also nice to just go around the walkway. You get to visit most of the towers of this history castle and you also have a lovely view on Tower Bridge and the innermost ward.

Next up was a visit of St. Paul’s Cathedral. We hesitated a while before going inside, as the entrace fee was £18, but in the end the good weather decided for us. You see, from the top of St. Paul’s Cathredral you have an amazing view on the city of London. It takes 524 steps to get up there, but it’s definitely worth it when the weather is clear.

Also, the inside of the Cathedral (of which you can’t take pictures *another sad face*) is really impressive. Even if you don’t want to go all the way to the viewing point, you definitely have to go up halfway to the Whispering Gallery. Such a beautiful bird’s-eye view of this beautiful building!

I had of course already seen the magnificent Palace of Westminster and it’s famous clock on all my previous trips, but you just can’t go to London without admiring this beauty. To me, it’s the symbol of the city. I always love taking pictures of it. 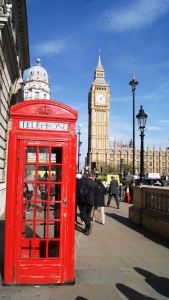 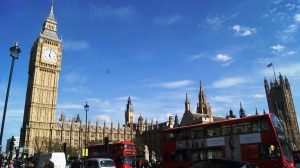 Last week was the first time I was able to go to Notting Hill. This part of London mostly got famous because of the homonymous movie with Hugh Grant and Julia Roberts. But what attracted me about this part of town are the typical beautiful, colorful houses. Just check out on the pictures below. Aren’t they gorgeous?

Oh, and if you want to go see those pretty houses, go on a Saturday morning if possible. Then the Notting Hill market is being held on Portobello Road and it gives the neighborhood a little extra. It has everything from antiques to fruit and vegetables, clothing and gadgets. Also, be sure to stop in the ‘Hummingbird Bakery’ on Portobello Road for the most delicious cupcakes in the world (So jummy that I wasn’t able to take a picture before it was already half eaten. Oops!) 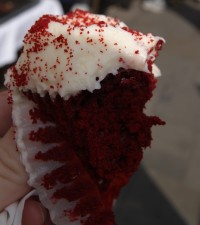 This is by far one of my favorite places in all London, so obviously I go back every time. Camden Town is a bit up north London, and has many amazing shops and most imporantly; two markets; Camden Market en Camden Lock Market. Both markets sell all kinds of stuff from clothes, to candles, to jewelry, to paintings. You can find almost everything there. Especially for serie, movie and music junkies, there are tons of merchanise stuff. For example, I found an awesome deathly hallows sweater and necklace and I also bought a timeturner necklace which is so damn awesome!

Aside from the many gadgets, there are also tons of food stalls in Camden Lock Market where you can find food from all over the world. If the weather’s nice, there are many benches where you can enjoy all those delicious goodies. Definitely recommend going there around lunch or dinner. The atmosphere is just amazing!

I’ve only been to Abbey Road because it was in between Notting Hill and Camden Town and I thought it would be nice to see the zebra crossing in real life. For those who still don’t have any idea what I’m talking about; does this ring a bell?: 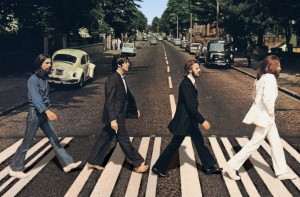 Yes, on Abbey Road you can find the famous zebra crossing from the Beatles’s album ‘Abbey Road’. While it is indeed “only” a zebra crossing, it’s quite a weird feeling knowing these iconic people once walked there.

To be honest, I wouldn’t go there if I didn’t have a lot of time, but still, it’s a nice thing to see and I’m glad I was able to cross it off my London bucket list.

I have a huge thing for parks and Hyde Park is one of the favorite parks I’ve ever been to. It’s so big that it never feels really crowded and the most awesome thing; there are squirrels! They’re just so damn adorable. Last week I wasn’t able to spot any as we just briefly walked through Hyde Park at the side of Oxford Street which has a lot of open spaces, but when you enter by Buckham Palace, there are way more trees in which these cute little animals can hide. If you’re lucky – and careful – enough (like I was a few years ago), they come really, really close! But aside from that, it’s just such a beautiful park and a lovely place to have picknick when the weather permits it. 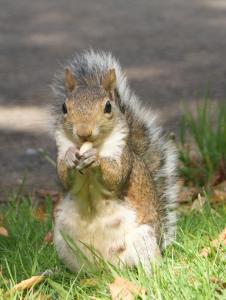 And that’s it for all the main things I’ve done. Of course, I’ve also been to Trafalgar Square, Leicester Square, Oxford Street and Picadilly Circus etc, but there isn’t a lot to say about those aside from the fact that you have to at least go see them once while you’re in London. So here are just some random pics I also took during my four day stay in London:

As for the hotel we stayed in; I don’t have much to say besides the fact that I don’t recommend it. We stayed at Travelodge London Farringdon and while the hotel itself was clean and the staff was nice, it was quite noisy as it was next to a busy street and at least a fifteen minute walk from the nearest metro stations. The only positive thing is that it’s only fifteen minutes away from King’s Cross St. Pancras, so when you arrive you don’t have to haul your luggage across London. Next time, I’ll be looking for another hotel, although I’m not sure if I’ll succeed to find something better for the same price. I guess I’ll let you know when I do go back, and I hope that’s soon! 😉