I’ve been to Paris many times in my life, yet I’d never seemed to have found the time to actually write something down about this lovely city. But since I’ve just returned from a little trip to the City of Lights, I thought it was about time I shared some of my love for (and pictures of) Paris with you all. 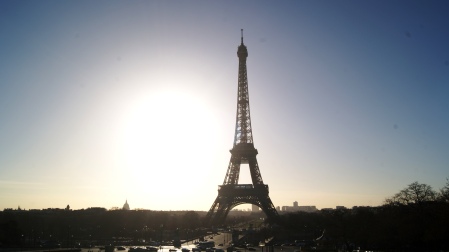 This time I won’t give you a play-by-play of my days, as I always just wander around Paris since I know most of the city by heart. I’ll just give you a Top 10 of my favorite spots and things to do in the capital of France with a bit of explantation.

This is probably my favorite spot in Paris. Not only is the basilicia really beautiful, you also have a really amazing view on Paris from up there, even without going up in the basilicia itself. I love to just sit on the stairs up to the basilica, looking at the people and enjoying the weather. Usually there are also a street musicians playing famous french songs, so the atmosphere is just so lovely. Oh, and while you’re there, don’t forget to go to Place du Tertre as well, so you can see the lovely artwork. It’s only a few streets from the Basilica.

Tip: Go there when the weather is best. The basilicia is most beautiful in the sun with a blue sky surrounding it. Also, the view on Paris isn’t that pretty when it’s cloudy or rainy. Of course, you have to be lucky to have nice weather but just go on the best day on your trip or whenever you see it’s clearing up.

The Notre-Dame is probably the most famous building on the Ile de la Cité, but surprisingly, that’s not my favorite spot on the isle. Of course, it’s still worth to go see it, but I just love the little tip of the isle. If the weather’s nice, it’s just such a nice spot to enjoy the sun and the view. And for the Taylor Swift fans; Taylor was sitting there as well in her clip of ‘Begin Again’.

Duh. You just can’t go to Paris without going to see the Eiffel tower. It’s the symbol of Paris. I haven’t gone up the tower in a long time, since waiting lines are always huge, especially on sunny days. But I just love to hang around the tower for a while. In summer, it’s nice to have a picknick – or just a snack – in the grass in front of the tower and in winter you can sit on the benches around it and enjoy the view.

Tip: If you want to go up the Eiffel Tower, either book tickets in advance or go at least half an hour before opening to go queue. The latter option is the one I prefer, because with booking tickets in advance you can’t known whether the weather will be ideal to go up that specific day. My friend had booked a skip-the-line ticket to go up last thursday and the visibility was just horrible. Either way, we didn’t go up, as she had booked with Expedia but those people had forgotten to alert the people who actually did the tour that we were going to be joining them. We were “lucky” that the weather sucked so it wasn’t that horrible that we couldn’t go up, but nonetheless, since that fell through they weren’t able to go up the Eiffel Tower at all. So boo Expedia!

Tip 2: Also go see the Eiffel Tower by night at the change of the hour. There is a light show then that goes on for five minutes and it’s just so magical. You can see this every hour after nightfall until about 2 am, I think.

Tip 3: Around the tower, there are many street vendors trying to sell key chains and small replica’s of the Eiffel Tower. While I don’t exactly encourage to buy stuff from them, you can easily bargain to get the bigger replica’s for a relatively cheap price (and cheaper than in the ‘official’ shops). Just don’t let them put anything in your hands before you’ve actually agreed to buy something otherwize they’re hard to shake off. 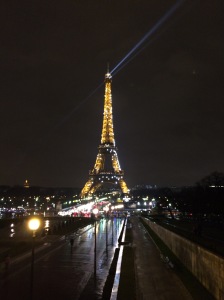 This is probably one of the most beautiful buildings I’ve ever seen in my life. The outside may not seem all that spectacular, but the inside is just marvellous. I’ve only been inside once about eight years ago, but up until this day I still remember how breathtakingly beautiful it was. Since it’s been such a long time, I lost my pictures I took that day, but if you have time and are interested in decadent decoration, you need to visit the Opera. If you still aren’t convinced, check some pictures on Google. Next time I’m in Paris, no one will stop me from going inside once more.

If you like shopping – and have a big budget -, this is definitely the place to be. Galeries Lafayette is probably every shopaholic’s wet dream as every big brand can be found there. But that is not why I like Lafayette so much. No, it’s the building that does it for me. It’s so beautiful from the inside.

Tip: Go up to the seventh floor for some cool Paris souvenirs and up to the roof for a view of the city. Unfortunately it was raining heavily when we went there so we didn’t go up for the view.

You cannot go to the City of Lights without actually seeing the Paris’ lights. Just walk around and take it all in. Be mesmerised by this city. I recommend to just walk along the Seine as it’s prettiest (and most romantic). And hopefully you’ll get better weather than we did.

Another one of the must-does when in Paris. Just walk the Champs-Elysées and window shop or do some actual shopping. But most of all, make sure to look up and admire the beautiful buildings.

The Tuileries gardens aren’t all that impressive during winter, but in summer, it’s one of the loveliest places. When I went to Paris in July 2013, there were all kinds of stands there selling everything from slushed puppies to ice cream. The atmosphere was just so amazing and relaxing. Around the fountain there are garden chairs in which you can just enjoy the sun and the surroundings. Those chairs are also out in winter, but it looks a lot less lovely then when the sun’s not out.

Everyone knows the Louvre for the world famous Mona Lisa painting, but the building itself is pretty damn amazing as well. I just love the square with the pyramid and when the weather is nice and warm, it’s really lovely to just sit by the fountain.

Tip: The Louvre is really freaking big, so if you have time to plan your trip, definitely try to determine which works of art you want to see before entering the museum.

Last week, I fell in love with Paris all over again and while I’ve only been back a few days, I can’t wait to go back again. I hope to be able to squeeze in a visit to Versailles, which is only about an hour out of Paris, another visit to the Opera Garnier and another visit to the Louvre.

If you have any questions about this city, you can always message me or leave a comment below. I’d love to help you out.