For the first day of my citytrip, I had planned to explore the Buda side of Budapest. For those who aren’t really familiar with the city, Budapest is devided into two parts “Buda” and “Pest” by the river Danube.

The Buda side is the old part of the city, with the Buda Castle and Géllert Hill. Those places are a bit higher up, so they offer you a really nice view of the city and that’s how I wanted to start; with a nice overview.

For this trip, I once again used the “100% Boedapest” guide (which is Dutch, sorry!) as they have walking tours mapped out to get from one place to another.

I started my tour across the river, on the ‘Pest’ side, at “Ferenciek Tere” so that I would already see from afar what I would discover the rest of the day. I crossed the Chain Bridge and ended up on Clark Ádám Ter, where you can start your walk up to the Buda Castle (and where the first walking tour from my guide started). For those who don’t like walking, or who are less mobile, it’s also possible to take the Budavári Siklo, a little cable car that will take you up for 1100 florints. Because I still had a lot of walking to do the rest of the day, I decided to take the cable car, and also because it offers a really nice view on the other side of the city.

Once I was at the Buda Castle, I found out that over the weekend, there was a chocolate festival going on around the site, which meant I had to pay entrance to get to see the inner court of the Buda Castle. This was sort of an unexpected cost, but it made the atmosphere more festive there, so I wasn’t really complaining. The Buda Castle is so beautiful from up close and the Matthias Fountain is really a masterpiece. Definitely worth it to spend some time wandering around the place, because you’ll also end up having a nice view on ‘Pest’.

Next, I continued to follow my walking tour towards the Matthias Church and the Fisherman’s Bastion. On the way over there, you can stop at the Sziklakórház, which is an old hospital from World War II in a cave. You just have to go down some stairs and then go right and you basically can’t miss it. I didn’t go in because I lacked time, but if I had had the time, I definitely would have considering going in for a tour.

You’ll also pass the National Archives building, with their really beautiful roof. There are multiple beautiful roofs in Budapest, but this one is just marvelous.

And then I finally arrived at the Matthias Church (which named after the Hungarian King Matthias who ruled in the 15th century) , and damn, it was so beautiful. Once again, with a really colorful roof. It’s just such a majestic building that I couldn’t not stop and stare for a while. The church was build in the 13th century but was destroyed later on. With the remains, they’ve build the church again in the 19th century. Unfortunately I couldn’t visit the building because it was closed off to public that specific day.

On the right side of the church, you can find the Fisherman’s Bastion. That was my favorite place in Budapest. It offers a great view on the beautiful Parliament, you can still see the Matthias church and the Bastion itself is just really pretty as well and had a farytale-like atmosphere. The seven towers of the Bastion represent the seven Hungarian tribes who founded the country in 895, and they were used as a look-out-tower. Needless to say, the view is spectacular. The terrace view is free, but since I loved the Bastion so much, I payed 700 florints to go up higher so I could have a better view. It’s not really a more beautiful view, but it’s a bit calmer up there and you can take a seat and enjoy the panorama for a while.

After the Fisherman’s Bastion, I went all the way down to the bank of the Danube River across from the Parliament to get a view of this marvelous building from closer up. And it really is amazing. It’s definitely one of those building that stand out in the city no matter where you are. 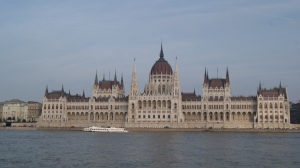 My walking tour then directed me back to Clark Adám ter, where my tour had started, but instead of walking the entire way, I took one of the trams there to save my poor feet since I still had a lot of walking ahead of me. From there I walked all the way to Géllert Hill. On the way over there, you pass the Rudas Thermal Bath, one of the biggest spas in Budapest. But instead of visiting that one, I had planned to visit Széchenyi Bath and Spa on my last evening.

So up I went. The walk up Géllert Hill is quite tough as there are lots of stairs – and I didn’t see any other way to go up except for walk it – but the view on Budapest from up there is just magnificent.

Little before you’re halfway up, you pass the Géllert Monument which represents bisschop Géllert – who didn’t want to be converted to Christianism – on his knees in front of one of the people from one of the tribes who founded the city. From that spot, you also already have a lovely view on the city.

But nothing beats the view from the Citadella on top of the Géllert Hill. Because I didn’t feel like walking all the way back up, I made sure to be there right before sunset, so I would be able to have the view from the top by daylight and at nightfall. It was just so beautiful, it nearly took my breath away. It’s definitely worth the tiring walk up there.

When I finally was able to tear myself away from this lovely sight, I went around the Citadella, so see the Freedom Monument. Then on the way down, I was able to enjoy the sight of the other side of the city with the beautiful Freedom Bridge.

When you’re nearly all the way down, there is also a church in a cave. It really is worth to go in because it’s so differt from any other church. One downside for me; since it was dark outside and there was no one else in the church when I was there, I must say that I didn’t feel entirely too comfortable on my own there. But still, such a beautiful place.

Then once I was all the way down from Géllert Hill, I was right at Freedom Bridge, which is also very lovely when lit up at night. 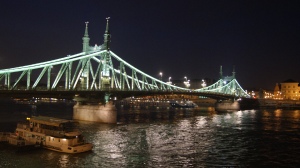 That was where the walking tour of my guide ended, but since it was only around 7:30 pm by the time I was down, I decided to go back to Buda Castle to have the lovely view from up there by nighttime. I took the tram from Freedom Bridge to Clark Adám Ter, and instead of taking the cable car to go up to Buda Castle, I walked up this time. And the view by night migth even be more beautiful than the one in daylight. 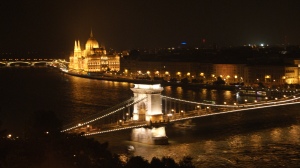 Satisfied with the things I had seen the first day, I went back to my friend’s house for some much needed rest. As much as I had enjoyed exploring the city, my feet obviously hadn’t. 😉

For those who are interested in a scan of the walking tour I did, just send me an email or fill in the contact form here and I’ll send you the map with the intructions. Also, if you have any other question about visiting Budapest, don’t hesitate to send me a message. I’m happy to be able to help.

In my next blog post, I’ll describe my second day, on which I visited the Jewish Quarter with the Great Synagogue, and did a lovely boat trip on the Danube.