I didn’t need to think twice about booking a trip to Budapest, the capital of Hungary, when I came across cheap flight tickets. For a rough 50 euros I could go to Hungary and come back, with insurance included. And add to that that I wouldn’t need to book a hotel room because my lovely friend Lea opened up her home to me; yup, trip was booked.

Before this vacation, I had no idea what Budapest had to offer, but now I’m completely in love with this city. There are many different buildings and places to visit, which make this city so interesting. Over the next few posts, I’ll discuss what I did every single day of my four-day trip. But first things first; how was my flight and what are the means of transport to use in Budapest itself?

To get to my destination, I flew Ryan Air. It was the first time I went with this airline and even though I’ve already heard many complaints about it from acquintances, I had a really nice flight. There was a 30 minute delay, but that can basically happen with any airline.

One thing I want to get off my chest though – and this counts for every airline and every airport -; why is water so freaking expensive? For all I care you can ask ten euros for a bottle of soda, but for plain water, I’d wish they’d lower their prices a bit. I was really thirsty on the flight and three euros for a small bottle is just a crazy amount.

That being said, I have nothing else to add but the fact that my flight went really smooth. There was an annoying bunch of people on the flight though (bachelor party – meh) but once again, that can happen with any airline. The staff was very professional and asked them to shut up a few times. I literally didn’t find anything bad about Ryan Air that couldn’t occur with other airlines as well. So count me a fan.

Then in Budapest itself, the public transport is really well worked out. You can literally get everywhere you want by using metro, tram or busses, and all with the same ticket. I got myself a ticket which was called 5/30. I just had to cross the time I used the ticket for the first time and then it was valid for 24 hours on every type of public transportation within the borders of Budapest. (Only for trains you sometimes need another ticket.) It’s a series of five tickets, and costs 4550 florints. 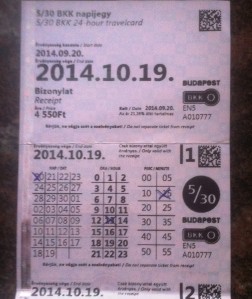 As you might have noticed above, in Hungary they don’t use euro, but florints. 1 euro is about 300 florints (depending the currency at the time of course). So keep in mind that you’ll need other money when travelling to Budapest. Food is generally cheaper than elsewhere, and entrance prices are decent as well, so you won’t need loads of money for this trip.

So, that’s it for the general part. As I didn’t stay in a hotel, I can’t give you any advice on that, although I have heard that hotels in Budapest are also pretty cheap right now.

In my next post, I’ll tell you all about my first day in Budapest, on which I discovered the Buda-side of Budapest.

Oh how this hurts. Right now I was supposed to have just landed in the beautiful city of #Lisbon. In the best of form and 100% ready to tackle the triathlon challenge in two days. Instead I'm at home, hating the everliving shit out of our current situation. Fuck you #covid19 !
March into April, April into May. Time ticks on, merciless. But I'm so happy that here in #Belgium we're allowed again to drive a little distance to a #park or forest to exercise. 🌳 I've missed the view on this beautiful #basilica and consider myself lucky to have places like these nearby. Starting this Sunday we'll also be allowed to see a maximum of four other people, which sounds like music to my ears. After almost eight weeks of lockdown on my own, I've been craving some social interaction! I just hope that people won't take advantage and do more than is allowed. I just can't see how I'd cope with going back a step... Anyway, hope you are all safe and will remain safe! We've already gotten so far, so let's continue to stick together and beat this awful virus together 🤗
Five years ago I was now on my way to the beautiful city of #Amsterdam 🌷 for a two day getaway with some of the best people in my life. While a #throwback 🔙 usually makes me long for the prospect of revisiting cities and places, I'm now so much more counting down to the time I can just meet up with my friends again. 😔
Six weeks in quarantine have passed and this whole situation still feels surreal. But even after all those weeks, I'm still discovering new places and roads in my hometown. I could get used to lunch walks like these. As a matter of fact, I kind of already have! Nonetheless I'm dying to see my friends and family again, as it is getting quite lonely at home on my own. Hopefully we'll see a light at the end of the tunnel soon but in the meantime, stay home and stay safe! 🤗
It frustrates and saddens me beyond belief how people are taking advantage of the little freedom we still have to exercise outside to go visit family and friends by foot of by bike. Yes, I'm sad too that I wasn't able to visit my parents and grandparents over the Easter weekend, but I stayed home because that's the only way to see them again as soon as possible, in a healthy world. Visiting people now is so f*cking selfish and will only result in a longer lockdown and a cancellation of the whole summer. Be smart; STAY HOME!
COVID-19 got us all stuck at home, but instead of letting my head hang and sulk about my cancelled triatlon and trip to Lisbon (and possibly even Australia), I'm taking this period of time to find some inner peace and mostly discover the little gems of my hometown. 🌼 I'm very lucky to live on the countryside, so nature is all around me. It's nothing like the Grand Canyon or the Rocky Mountains, but in times like these, it becomes a lot easier to appreciate the little things in life. ☺️ I hope all of you and your loved ones are safe and healthy. It's never been easier to save lives; just stay home! Stay home and be grateful of all you have. The better we follow the rules, the sooner we'll be able to explore our wonderful earth again! 🗺️ Stay safe and happy near-your-home wanderings! 😘
%d bloggers like this:
%d bloggers like this: